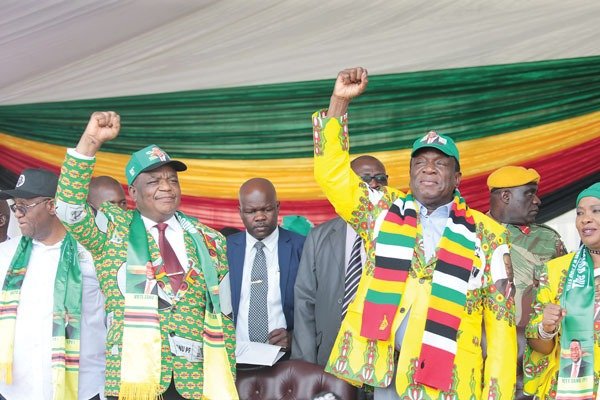 ESIGODINI, the venue of the ruling Zanu PF party’s annual conference, has been placed under security lockdown ahead of President Emmerson Mnangagwa’s visit later this week, six months after he survived a deadly bomb blast at a campaign rally in Bulawayo that killed two aides and injured several senior party officials.

Armed soldiers and an avalanche of security agents have besieged the gold-rich Matabeleland South district to provide security to Mnangagwa and the thousands of Zanu PF party faithful who are expected to attend the first conference without former leader Robert Mugabe, who was ousted in a de facto coup in November last year.

Several roadblocks have also been mounted on the highway from Bulawayo to Esigodini and to as far as Gwanda and Filabusi, where some delegates are staying for the conference which started yesterday.

Although no suspects have been arrested in the blast that rocked White City Stadium as Mnangagwa (76) left the podium, killing two security aides on June 23 this year, the Zanu PF leader later told BBC that he suspected dissidents from his own party, linked to Grace, the wife of his predecessor Mugabe, were behind the attack.

A senior police official who declined to be identified because he was not authorised to speak to the Press, confirmed the heavy security deployment for the 5 000 Zanu PF officials expected to attend.

“Yes, we are not taking any chances in terms of security. The area is a hotspot for crime because of the presence of panners, who come to Esigodini because of its gold deposits,” he said.

“We have to make sure that the area is cleared of such unruly elements who might want to take advantage and terrorise delegates coming for the conference. We are happy with our deployments, so that the conference goes on without any incident.”

The security details were evident, even in the nearby Habane township.

But the normally sleepy town is also enjoying the fillip of hosting the extravagant gathering, with fuel supplies plentiful in all garages and along the way. Roads leading to the venue have also been patched to spruce up the mining-cum-agricultural town.

Attendants at most service stations said they have had regular fuel supplies in the past week and that the deliveries have been consistent despite the rest of the country continuing to suffer from shortages.

Mohadi, who is also the second secretary of Zanu PF and the most senior party official in Matabeleland, on Saturday visited Umzingwane Boys High School, the venue of the conference, for inspection.

He said the conference would place emphasis on economic development in line with the party’s vision to transform the country to an upper middle income status by 2030.
Among the delegates invited to attend the conference include representatives of industry and commerce.