Zanu-PF indaba to focus on economy 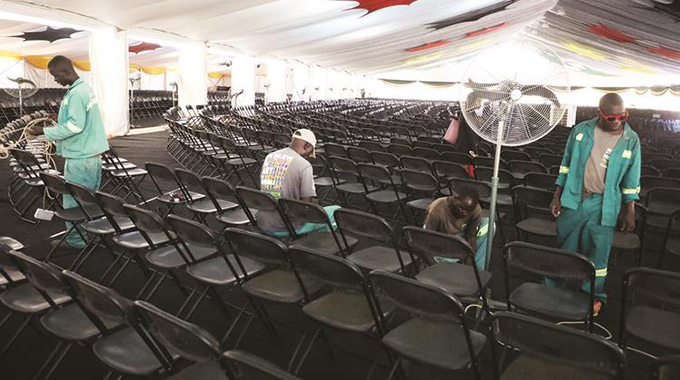 Workers from a chair hire company put final touches to the venue of the Zanu-PF conference, which starts tomorrow at Goromonzi High School. —Picture: Justin Mutenda

Herald Reporters
Economic development anchored on the Transitional Stabilisation Programme (RSP) will dominate Zanu-PF’s 18th Annual People’s Conference to be held at Goromonzi High School, Mashonaland East Province, this week, a senior official has said.
Several people lined up to brief delegates will focus on efforts to turn around the economy in several thematic areas such as mining, agriculture, food and nutrition, and value addition and beneficiation.

In line with the Government trajectory of reviving the economy through production, the Zanu-PF Youth League, in conjunction with the Ministry of Lands, Agriculture, Water and Rural Resettlement, will run an agribusiness exhibition and special input scheme launch for youths in agriculture at Zanu-PF Headquarters starting Wednesday.

Zanu-PF secretary for Information and Publicity Cde Simon Khaya Moyo said the state of the economy would be the conference’s preoccupation in line with the theme: “Modernise, Mechanise and Grow the Economy Towards Vision 2030.”
He said the theme was evidence that the party considered economic transformation as key in improving the lives of Zimbabweans who have had to endure decades of economic recession under the First Republic.

“The conference will obviously concentrate on the state of the economy consistent with the theme.
“This means we must transform our means of production and create jobs. We shall have speakers addressing us on several thematic issues around the economy.

“There are thematic committees on food security, infrastructure development, devolution, value addition, investment and other key aspects of this country’s socio-economic fabric which should be brought to the fore,” said Cde Khaya Moyo.

He said the conference comes at a time when the economy is transitioning from austerity to prosperity through higher productivity, growth and job creation as enunciated in the 2020 National Budget.

“We will be discussing the state of the economy, focusing on social services, poverty reduction efforts, reintegration, infrastructure development among others. We also want to focus on provincial economies, that is devolution,” he said.

Cde Khaya Moyo said preparations were now at an advanced stage with a Politburo meeting scheduled for Wednesday followed by a meeting of the Central Committee the following day.

Both meetings are set to be held in Harare before the official opening of the main event on Friday by President Mnangagwa at Goromonzi High School.

“It is now all systems go. We are finalising whatever has been outstanding. We are happy that we have secured enough transport to ferry delegates from all the provinces. Accreditation of delegates has been done and Central Committee members and Politburo members will be accredited this week. The conference will obviously be guided by our theme,” said Cde Khaya Moyo.

Stakeholders including seed houses, the fertiliser industry, agriculture students and senior Government officials are expected to brief delegates at the agribusiness exhibition running under the theme: “Youth in Agriculture, Moving Towards Vision 2030.”

“The Ministry of Lands, Agriculture, Water and Rural Resettlement in its drive to mainstream youth in agriculture is jointly exhibiting with all actors in the agricultural value chains in Harare on the 11th of December 2019. The event is a demand-driven initiative by young farmers and captains of industry in solidarity with His Excellency, the President of the Republic of Zimbabwe Cde E.D. Mnangagwa following successful food security efforts and total commitment to the participation of youth in the agriculture value chains,” Engineer Reston Muzamhindo, the Acting Secretary for of Lands, Agriculture, Water and Rural Resettlement said in a statement.

Chief youth programmes coordinator in the ministry Mr Nickros Kajengo said over 100 exhibitors will participate, half being farmers and the rest companies taking up the free exhibition platform.

“Zanu-PF, through the Youth League, approached Minister Perrance Shiri asking if we would support this initiative that would bring farmers and the agro-industry together.

“The two main objectives are for farmers and stakeholders to meet since this is the peak of the farming season and to show solidarity with President Mnangagwa for Command Agriculture, the national irrigation programme and the setting up of a youth desk in the ministry.

“The desk is the first since independence and now youths can approach the desk when they want to get in touch with the minister or other senior officials. Youths are also grateful for the Empower Bank which was allocated $50 million for the youth,” Mr Kajengo said. President Mnangagwa told an extraordinary Zanu-PF Politburo meeting last week that the conference must provide appropriate policy direction to Government and outline achievable goals in line with policy targets.