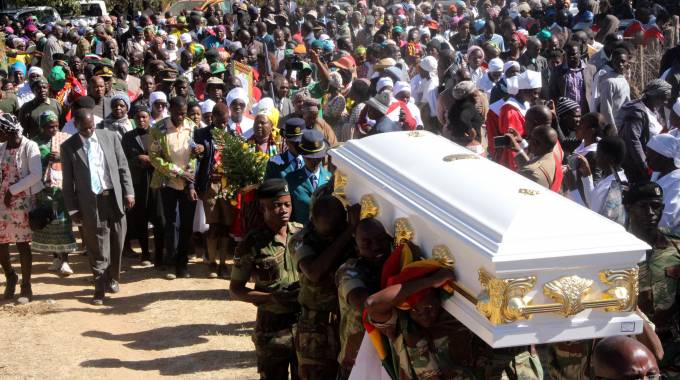 A DEMONSTRATION of unity was witnessed when politicians from the political divide thronged Macingwane village in Bulilima district to bid farewell to Mangwe MP and former Home Affairs Deputy Minister Obedingwa Mguni who was laid to rest at his rural home yesterday.

Cde Mguni, who died on Tuesday after a cough bout while attending Parliament, was declared liberation war hero. He was 56.

“Cde Mguni was a senior person whose desire was to bring politicians together and foster national development,” he said.

“Parliament is now poor without him as his ideas were always sound and on point. The number of parliamentarians who are present to bid him farewell are testimony to his good works as he would accommodate everyone without political bias.”

He said the late legislator was a committed cadre whose calls for unity were loud and bold.

“The kind of unity demonstrated today is what we want as Zimbabweans,” he said.

“That unity, that is evident at low political levels should go up and mature into proper political dialogue at the top.

“We have seen politicians from the political divide, the MDC Alliance MPs came in their numbers led by their chief whip — Mutseyami (Prosper). We have MPs like Hon Chinotimba (Joseph), Hon Nzuma (Soul) and many others from very far. All provinces are represented and that’s what we call unity.”

Cde Mguni, who was the Zanu-PF deputy chief whip, was rushed to the West End Clinic after the cough attack where he later died.

In his message following the death of Cde Mguni, Bulilima Mangwe Senator Simon Khaya Moyo said: “I feel part of my physical being has been ripped off. He was a committed, principled, and disciplined cadre of the revolution who was down to earth and a man of the people.”

Mguni was a second term MP, after winning elections last July. He polled 7 744 votes against his close challenger, Vincent Sihlabo of the MDC Alliance who got 4 536 votes.