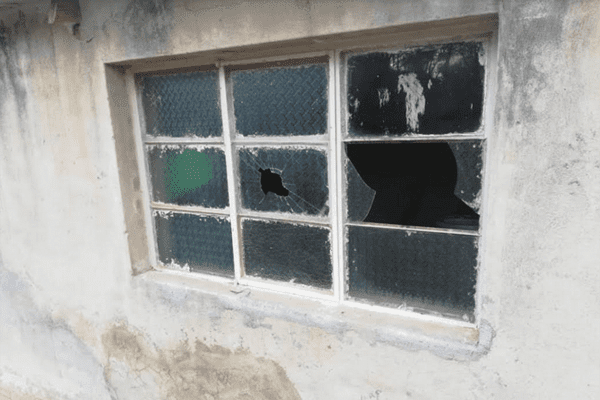 Part of the damage that was inflicted on Zanu PF provincial committee member, Moses Gutu’s house on Sunday evening at his farm in Nyanga by suspected fellow party members

ZANU PF Manicaland provincial committee member, Moses Gutu was on Sunday evening attacked at his farm in Nyanga by suspected fellow party members as intra-party violence continues to rear its ugly head in the province.

Gutu confirmed the attack, saying his wife and 14-year-old son were seriously injured and are currently admitted at Nyanga District Hospital.

“I am very sure that these are Zanu PF members who attacked me and my family, not the MDC. They wanted to torch my house, they were pouring petrol around it and when I woke up they started destroying property,” Gutu said.

“My wife and child were attacked with an axe and sustained deep cuts and they were admitted at Nyanga District Hospital.”

Property destroyed has an estimated value of $5 000.

It is believed Gutu angered his fellow party members due to his outspokenness on under-utilised land and abuse of government farm inputs.

Gutu has been calling for the redistribution of idle land in the province. He says he believes if the land is given to people with resources and a passion for farming, they would utilise it fully and help turn around Zimbabwe’s fortunes.

He has also called for accountability in government-funded agriculture projects including command agriculture where inputs are reported to have been misappropriated.

“Gutu is an innocent soul. He is a citizen like any other with the right to life. Whoever has issues, there are amicable ways of settling (them) than to attack him and his family,” Madiro said.

“If they are Zanu PF members, let me warn those perpetrators of violence, that this diabolic behaviour is unacceptable. The police are investigating the matter; once caught, the party is going to take drastic measures against them.”

Efforts to get a comment from Nyanga police were fruitless as their phones went unanswered.

An officer who spoke on condition of anonymity confirmed that senior police officers had visited Gutu’s farm and had begun investigations.