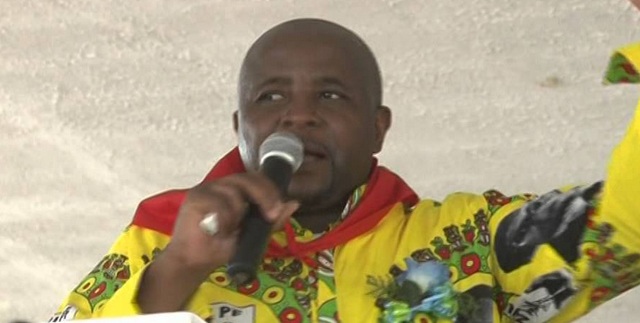 HARARE – A showdown is looming between the ruling party and the MDC over a planned demonstration by the latter with the Zanu PF youth league vowing to shut the opposition out of the capital city if they proceed with tomorrow’s protest.

The Zanu PF youth wing’s reaction follows an announcement by the MDC Alliance of a total shut down of the capital tomorrow in protest over the slow pace of electoral reforms.

One of the MDC Alliance principals, Tendai Biti, told journalists last week that because of the reluctance on the part of government and the Zimbabwe Electoral Commission (Zec) to ensure free and fair polls, they were now taking matters into their own hands by marching to the citadel of President Emmerson Mnangagwa’s government, his Munhumutapa offices.

Yesterday, Zanu PF youth league leader Pupurayi Togarepi said their patience with the “wailing opposition parties” that are scared of the elections was now running thin.

“If they want to shut down Harare, we will be forced to shut them out of Harare. The MDC must not interfere with independent bodies. Weren’t they part of the government that appointed Zec? As Zanu PF, we cannot just fold our hands and watch them break the law and try to arm-twist Zec to pander to their whims,” said Togarepi, who is also a Zanu PF politburo member.

Togarepi said, if provoked, the ruling party youths will fight back adding that the MDC was scared to death of the impending polls.

“They know that they have lost the elections and now they want to cause chaos. They are looking for an excuse and are jumping up and down to get the world’s attention but as the president has said, all countries are welcome to observe the elections,” he said.

Zanu PF spokesperson, Simon Khaya Moyo, was not immediately available yesterday to explain if the ruling party’s main wing was of the same view.

The opposition and civil rights organisations, which accuse Zec of covertly working with Zanu PF, were particularly incensed by the addition of polling stations by the electoral management body without consultations.

They are also concerned about the printing of ballot papers which they want to go through an open tender system but Zec and government are having none of it for security reasons.

When he addressed the media last week, Biti said the MDC Alliance was pushing for an external audit of the voters’ roll.

“We want to know who is printing the ballot paper, the agency printing it and what criteria was used to choose that company,” he said.

He accused Zec of going offside through the establishment of additional polling stations, which he said was illegitimate.

Said Biti: “Zec increased polling station from 10 000 to 11 500, which is illegitimate, and therefore not fair, that is what we are going to march against”.

Apart from the demonstrations, the MDC Alliance will also approach the courts to press for the reforms.

MDC youth assembly leader, Happymore Chidziva, warned the ruling party yesterday not to interfere with their constitutionally guaranteed rights, in this case freedom to demonstrate.

“Zanu PF should respect our rights to demonstrate. We are not talking about violence and the question we have for them now is, hasn’t their coup leader told them to stop violence and strive for unity? This just goes to show us that apart from being averse to electoral reforms they are not prepared to open the democratic space for all political parties.

“They abuse the State media and break the law with impunity yet the law is very clear that the media should be open for all. Nothing, including bullets and batons will stop us from pouring onto the streets to demand reforms otherwise the elections won’t go ahead,” said Chidziva.

Since assuming power last November, Mnangagwa has been consistent that the forthcoming polls will be free of blemishes especially violence and intimidation, which used to blight previous polls during former president Robert Mugabe’s reign.