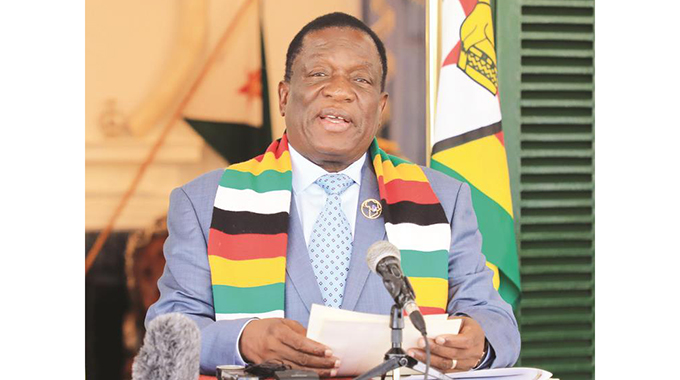 Political Editor
PRESIDENT Mnangagwa’s Vision to ensure Zimbabwe becomes an upper-middle class economy by 2030 will be achieved and the governing party Zanu PF should remove impediments, including land barons, that stand in the way of the goal, an inter-ministerial committee heard.

This comes as President Mnangagwa has directed relevant authorities, that include ministries, Government departments and agencies to leave no stone unturned in bringing sanity to the country’s local authorities that he said had failed Zimbabwe.

The President said corrective measures must be taken to bring order to the country’s growth points, towns and cities that have seen the mushrooming of new settlements, albeit without the requisite facilities such as water, sewer, electricity and roads around the country.

In the midst of the confusion are land barons, working in connivance with local councils, that have been fleecing desperate home-seekers by allocating them land on wetlands and other areas earmarked for other purposes.

The governing party directed its officials to weed out any party members dabbling in the illegal selling of residential land from the party as part of an exercise meant to rid Zanu PF of rotten apples.

According to a Government document,  Zanu PF officials who attended the inter-ministerial meeting were told to make sure that in future people are elected to positions in local authorities on merit and not merely popularity.

“The party, Zanu PF, should adequately explain what the President has directed, and which Government is about to do. The party must ensure none of its structures, office bearers, and/or officials stand in the way. Above all, the party should, from now onwards, revise and re-fashion its selection criteria for elective officials to ensure our public affairs are manned and managed by people with the key competencies. We have seen the costs of deploying characters who may be popular but wield no relevant skills required in running affairs of our municipalities.

“Never again should we blindly select candidates who run on party tickets. Municipalities and rural councils are about service delivery to the electorate. This is only competently done by structures which have a well-balanced set of skills which interact harmoniously for the benefit of home seekers and ratepayers. We have to reinvent our local Government politics.”

In his address to the nation last week the President slated urban councils, that are mostly run by opposition parties, for failing the nation.

“Government is deeply concerned with the illegal expansive construction in wetlands and river basins as well as the construction of houses without the provision of requisite infrastructure such as roads, water, sewer and electricity. The current excellent rains received across the country have exposed and lay bare the extent of problems associated with unplanned settlements in our urban, peri-urban and growth points.

“Henceforth, relevant ministries are being constituted into working groups that will focus on social service delivery as well as arresting the negative impact of the chaotic, unplanned illegal settlements in growth points, towns and cities.

“Meanwhile, alternative spaces have to be urgently identified and developed for relocation of families with houses built in wetlands and other undesignated areas. The Ministry of Housing and Social Amenities, along with other ministries, departments and agencies must immediately identify such areas and ascertain the quantum of affected households”.

The President is living up to his promise that there will be no sacred cows in the fight against corruption, with the anti-graft broom set to sweep away even those in the politburo who could be found on the wrong side of the law.

“Zanu PF and this administration will never allow the party to be a haven of malcontents and criminals. I thus exhort party cadres and the citizenry at all levels in line with our national development agenda to be guarantors of a corruption-free

However, some with links to the party are desperately trying to escape from the long arm of justice by throwing mud in the current exercise, notably sucking in ministers in their cases, something that the Special Anti-Corruption Unit has said it will guard against.

Wellington Peyama, one of the persons who is being investigated for dishing out residential stands in Chitungwiza, who also claims to be a member of Zanu PF has been trying to throw mud at the Minister of National Housing and Social Amenities Mr Garwe.

However, sources within the anti-corruption busters said Mr Peyama will have his day in court to answer charges of dishing out stands to desperate home-seekers in Chitungwiza.

Under President Mnangagwa’s watch, several ministers and top Government officials have been arrested on corruption charges with two former Cabinet ministers losing their jobs after being implicated in graft.

Going forward, President Mnangagwa said all members, across all party structures, must reflect on the party’s unassailable revolutionary character upon which the Government continues to build the country towards Vision 2030 to be an upper middle class economy.

Meanwhile in order to bring back sanity to urban councils, the Ministry of Environment and Tourism working with EMA will the lead the way in mapping wetlands around the country so as to come up with a masterplan of all ecologically sensitive spaces which must not be disturbed by human settlements.

That having been carried out, the Ministry of National Housing and Social Amenities, and the Ministry of Local Government and Public Works will step in to identify and quantify all places in flood-prone areas, on illegal spaces and other irregular places to jointly establish “the magnitude of likely displacement from unavoidable demolitions”.

Along with the Ministry of Local Government and Public Works, the Ministry of Land, Agriculture, Water, Fisheries and Rural Resettlement should identify suitable alternative land on which to relocate families and households which will be affected by the impending programme.

Relevant ministries are also expected to draw, and redraw plans for orderly settlements both on new spaces and those reclaimed after demolitions with the Ministry of Finance and Economic Development expected to mobilise funds for the construction of new planned settlements that should result in the development of the real estate sector, a sector which can contribute as much as 20 percent to the country’s GDP.

The Ministries of Energy and Power Development, Women Affairs, Community and Small Medium Enterprise Development will also be roped in to add the new settlements to the national grind and also bring sanity to cooperatives respectively.