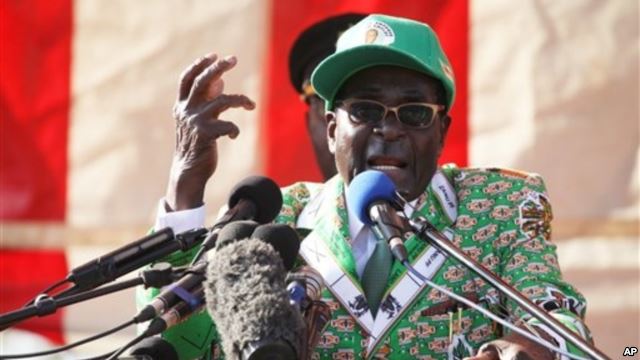 ZANU PF youth league has escalated its  attacks on former leader Robert Mugabe, pictured, whom it now wants stripped of all honours bestowed on him during his disastrous 37 years at the helm of the country.

This follows Mugabe’s withering criticism of President Emmerson Mnangagwa’s style of governance, particularly his government’s vicious crackdown against protesters in the January riots.
Last week, the youth league warned their former darling that he had crossed the line and agitated for harsher treatment by Mnangagwa who has, to his credit, so far remained unmoved by Mugabe’s attacks.

Zanu PF youth league leader Pupurai Togarepi has warned Mugabe that he could be stripped of his domestic honours because of his continued brawling with Mnangagwa and his government.
“As I reflected on events of the past month, itself a month of love, I thought about our former leader, a man whose birthday on February 21 is now a public holiday where youths from across the political divide take a breather and reflect, but do we really need to honour such a person? “Yes then but I am now confused.

“Can we keep our international airport named after a bitter man?  Can we walk on roads named after a person who destroyed the dreams and aspirations of a generation, these are questions that we need to discuss and debate.
“Least I am regarded as a revisionist, no I am not, I am only a Zanu PF son who loves his nation,” Togarepi said in a Facebook post.

During his reign, the ruling Zanu PF government honoured Mugabe by naming at one road in every city and town after the former strongman who ironically had the Harare International Airport named after him just months away from the stunning military coup which swept him from power.

The nonagenarian, who was ousted from power via a stunning military coup in November 2017, chose the occasion of his 95th birthday celebrations last month to once again stick the boot into Mnangagwa — whom he described as “cruel and rogue”.
Mugabe’s rant against Mnangagwa caught many by surprise as he was lately seen to be now tolerant of the country’s ‘new dispensation’ — even going to the extent, at some point, of praising his successor for “helping” his family.

Reacting to Mugabe’s latest attacks on Mnangagwa and his government, senior Zanu PF officials called for tough action against the frail nonagenarian this week, while also bemoaning the fact that he was being treated like a “little god” by his successor.

The officials from the ruling party’s youth and women’s leagues said as Mugabe was “unrepentant”, he did not deserve “the respect” that he was being accorded by Mnangagwa and the government.

Mugabe chose his 95th birthday celebrations at his palatial Borrowdale home — which is commonly referred to as the Blue Roof — to renew his feud with his once longtime aide, Mnangagwa, following his fall from power after nearly four decades at the helm of the country.

“You want to shower yourself with praises despite being at the top? You are not God ED. Today you are at the top, tomorrow you will be at the bottom. Keep that in mind. “God has his own way of punishing rogues and cruel people.

“He who is obsessed with seeing corpses everyday will soon realise that people would clamour too to see his corpse one day. I say to soldiers ‘stop killing people’. “What you are doing (killing people) is going to catch up with you very, very soon. Just tomorrow, it would have caught up with you,” the bitter Mugabe warned ominously in reports relayed to the outside world via his associates.

The nonagenarian was believed to be referring to the recent riots in which up to 20 people were killed when angry protesters clashed with security forces during a stayaway called by labour unions.
Pro-democracy and rights groups alleged that some rogue soldiers had also raped women during night raids, although the military has denied the allegations — saying this had been done by armed robbers and members who had deserted the security forces.

The January riots were sparked by steep fuel price hikes which were announced by Mnangagwa ahead of his trip to Eastern Europe.
“People should love their army … they should not fear the army. We can’t continue with people being bashed on the head.

“So, I say to you, ‘get your lessons correct’. Let’s create an environment where our people are happy, not what’s happening now.
“We will not shy away or be afraid to talk. No! Let’s be frank with each other,” Mugabe said further during his birthday celebrations.