‘Zanu-PF will deliver on its promises’ 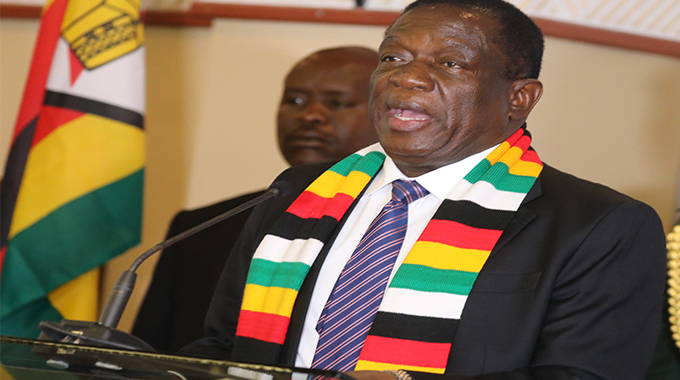 ZANU-PF will deliver on promises it made to the people, as the party’s just-ended indaba was not a talk show, President Mnangagwa said yesterday.

Addressing over 5 000 delegates at the 18th National People’s Conference at Goromonzi High School, Mashonaland East, the President said the party was very much alive and united.

“We must each play our part in Zanu-PF. Tinoti iwe neni tine basa.

“What message will you carry home? . . . Go back home and tell the people that: one, the party is alive, Zanu-PF imhenyu. Two, Zanu-PF is united, imhenyu, yakabatana.

“As we come to the end of this mega event, let these resolutions that we have made here embolden us and inspire action.

“These conferences are not talking shows. We must deliver on our promises. To this we must remain focused, united and guided by our party constitution.”

Added President Mnangagwa: “We have reached the end of this conference. This conference is the biggest conference of any political party that may come into your mind, if there is any, please tell me.”

He reiterated that elements bent on destabilising the country through violence would not be tolerated.

“I exhort you to be vigilant in the coming year and going forward. Keep your eyes and ears open,” he said.

“The January nonsense and periodic mischievous activities by opposition elements such as those we witnessed early this year must be nipped in the bud in future.

“Never again should we allow the loss of precious life of our countrymen and countrywomen in order to fulfil the agenda of a notorious few.”

The emphatic victories that the ruling party had scored throughout the years, President Mnangagwa added, demonstrate the deep faith and trust people have in Zanu-PF.

He said the party leadership would not let the people down and would continue to develop people-oriented policies and programmes.

President Mnangagwa chastised sections of the media for speaking ill about the country, Zanu-PF and its leadership.

“There are others who are not here who write from wherever they are after smoking dagga,” he said.

“Let them write and smoke as we do our work in peace, as we look for ways to ensure we develop this country.

“Doing so in peace to ensure that the war that we fought to free this country and the legacy that we gave to our people be guarded, and that there is no enemy to take that legacy away from you.

“No one will take the legacy of freeing the country from Zanu-PF.”

The President appealed to the party members to be guided by national aspirations and ethos in all their deeds and operations.

Party members who were wavering in their loyalty to the party have to introspect and recommit themselves to the correct party line, he said.

“Disloyalty and raw deeds of any kind must be corrected.

“The unity, rejuvenation and strengthening of party structures must continue to be our priority. We all must recruit more members.

“We must groom and nurture those who join us — allow them to be loyal, productive and patriotic members of our party.

“On behalf of the party and Central Committee allow me to once again commend you for your support, your dedication, your loyalty and commitment to the party and leadership.”