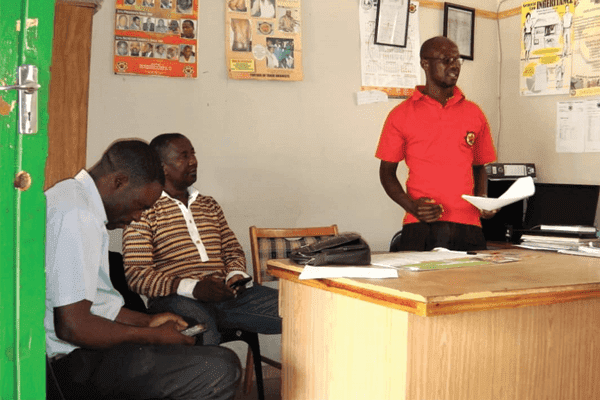 Workers union leaders yesterday condemned the continued brutalisation of workers by alleged State security agents and failure by government to acknowledge and decisively deal with grievances raised by employees.

Speaking at the belated Zimbabwe Congress of Trade Unions Midlands chapter September 13 commemorations — where the labour body honoured 147 of its members who were tortured for participating in an anti-government protest, National Metals Workers Union of Zimbabwe president and ZCTU general council member Antony Nyashanu said government has over the years been trying to silence workers.

“Brutalities and insensitivity to workers have continued, the system has been activated to annihilate and silence workers from all angles … Our leaders, president Peter Mutasa and secretary-general Japhet Moyo are facing serious charges bordering on treason for organising the 14-16 January stayaway which saw the military intervention resulting in the death of 17 people,” he said.

“The government’s response to genuine issues that triggered the stayaway, which are the high cost of living, low salaries etc, indicated that it had not warmed up to the reality of (dealing with) workers’ grievances. As we gather today, over the years the horrors of Friday 13 September 2006 have claimed the lives of Tonderai Nyahunzvi, Moses Ngondo, Rwatipedza Chigwagwa and others who were subjected to the worst horrors of police brutality.”

On Friday September 13 2006, riot police brutally quashed a demonstration led by then ZCTU leader Lovemore Matombo and left several unionists for dead. Some of the surviving victims who were tortured by the police now live with permanent injuries and psychological scars. These include Matombo and George Nkiwane, former secretary-general Wellington Chibhebhe, erstwhile first vice-president Lucia Matibenga and firebrand unionists — James Gumbi, Dennis Chiware and Tonderai Shonhe.

The demonstration was meant to push government to arrest galloping hyper-inflation, ensure poverty datum line-linked wages, free distribution of life-prolonging anti-retroviral drugs (ARVs) and shelve the implementation of the compulsory National Health Insurance Scheme that was to be administered by the National Social Security Authority (NSSA).

“Some of these demands remain unmet today,” Nyashanu said.

He described statements by the late former President Robert Mugabe soon after the 2006 violence as an “epitome of trade union suppression and intolerance” which has extended into the leadership style of President Emmerson Mnangagwa.

Addressing people who had gathered at the Zimbabwe Mission in Cairo, Egypt, Mugabe at that time said: “If you want an excuse for being killed, be my guest, go into the streets and demonstrate. The police were right in dealing sternly with the Zimbabwe Congress of Trade Unions leaders during their demonstration… because the trade unions want to become a law unto themselves. We cannot have a situation where people decide to sit in places not allowed and when police remove them they say no… Vamwe vaakuchema kuti tarohwa, ehe unodashurwa (They are now crying foul that we are beaten up, yes, you’ll get a thorough beating.)
When the police say move, move. If you don’t move, you invite the police to use force.”

Nyashanu said the ZCTU will continue to pile pressure on Mnangangwa’s administration to address the plight of workers caused by his government’s failure to address the biting economic challenges.