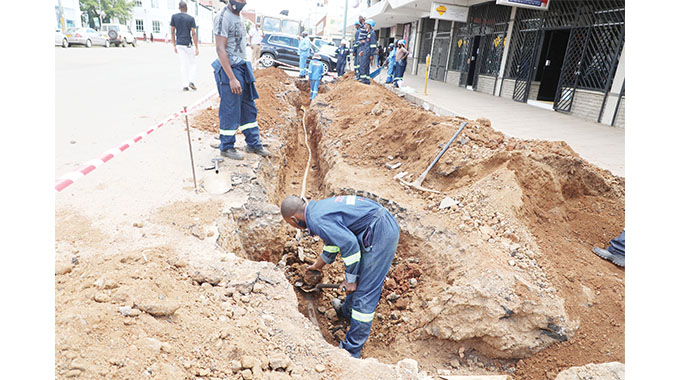 Vusumuzi Dube, Senior Reporter
PARTS of Bulawayo’s Central Business District have gone for six days without electricity with the Zimbabwe Electricity Transmission and Distribution Company (ZETDC) saying they only managed to identify the faulty cable on Friday.

Initially, the power utility had said the electrical fault was at a substation at the Belmont industrial area.
The power outage has also affected the ZETDC main offices along Fife Street, with some businesses forced to shut down as they felt the brunt of fuel charges to operate generators.

In an interview with Sunday News yesterday, ZETDC Western Region general manager Engineer Lloyd Jaji said they had managed to isolate the problem to an underground cable along 9th Avenue between Jason Moyo and Fife Street.

“Our technicians have been busy digging up that cable, where they will join it and do all the necessary checks before switching on part of the affected areas, this could be either by today (yesterday) or Sunday (today).

“However, there is a part which is supplied by a transformer located at OK Supermarket (Jason Moyo Street) which will have to endure a couple more days without electricity as that transformer was burnt and needs to be replaced, which we are in the process of doing,” said Eng Jaji.

ZETDC acting general manager Engineer Lovemore Chinaka also confirmed that their teams were working flat out to ensure that electricity was replaced noting the effect the power outage was having on businesses in the CBD.

“We are fully aware the effect this outage has had on various businesses and we sincerely apologise for this. Our teams have been working round the clock to address this issue and at lease by Friday evening they had narrowed down the fault and are now replacing the faulty cable,” said Eng Chinaka.

In the initial stages of the blackout, there was also a blackout in residential areas such as Suburbs, Woodlands and some parts of Ilanda.

The power outages being experienced in parts of Bulawayo and the southern region have also been attributed to rampant vandalism and theft of electricity infrastructure.