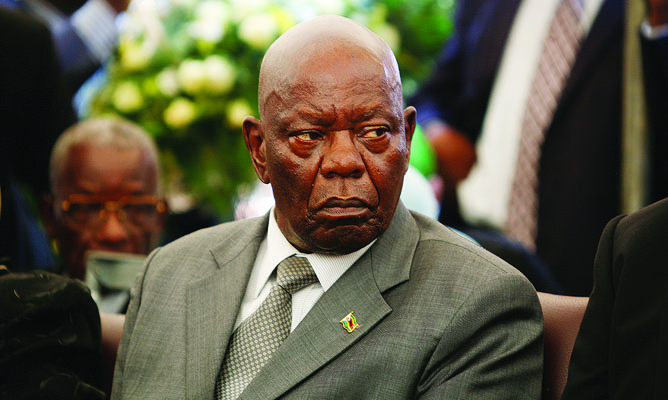 The power utility approached the High Court on Monday this week and issued summons against the former politburo member, who is yet to respond to the litigation.
This came shortly after Mutasa failed to stop the auctioning of his household property and vehicles over a $26 900 legal debt with his lawyers, Nyakutombwa Mugabe Legal Counsel.

He had engaged the lawyers to contest his expulsion from Zanu PF in 2015.

In the latest case, ZETDC claimed that it resorted to taking legal action after the former Zanu PF official allegedly ignored letters of demands sent to him.

“The defendant (Mutasa) is indebted/liable to the plaintiff (ZETDC) as at April 13, 2018 in the claimed amount ($69 043,23), being charges in respect of power/electricity supplied by the plaintiff to the defendant at the latter’s special request and instance in terms of the running electricity supply contract between the two, which amount is now due,” the power utility said in its declaration through its lawyers Chihambakwe, Mutizwa and Partners.

ZETDC claimed the debt accrued from Mutasa’s eight properties, including his Soundrider Farm in Headlands.

“Wherefore, the plaintiff herein claims: — payment of the sum of $69 043,23, interest at the prescribed rate of interest calculated from the date of issue of summons to date of payment in full, both dates inclusive and cost of suit.”

Mutasa is self-acting and copies of summons were sent to his residence, number 3 D16 Chishawasha Road, Umwinsdale, Harare.