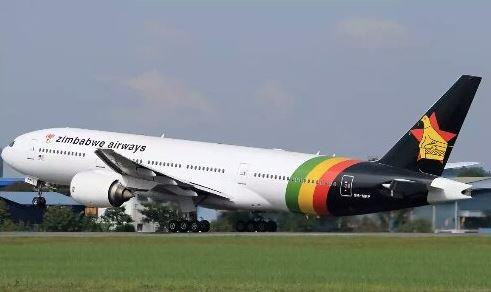 HARARE – In a dramatic development which further shines the spotlight on Zimbabwe Airways — an opaque new airline which was suspected to have close links with former president Robert Mugabe’s family — the government said yesterday that it owned the controversial airline which has acquired  four wide-bodied planes from Malaysia.

Speaking at a function at Robert Mugabe International Airport yesterday to receive the first Zim Airways plane — a Boeing B777 — Finance minister Patrick Chinamasa  stunned journalists when he said ZALC was a government company which it had used to acquire the planes from Malaysia, allegedly as a strategy to overcome sanctions.

“I am here to categorically state that the aeroplane standing outside is the property and an asset of the government of Zimbabwe. I know speculation has been rife that the airline belonged to the former first family. That is false.

“They have no interest of any kind in this aircraft. I am also here to make it clear that Simba Chikore (Mugabe’s son-in-law) has no shareholding at all, directly or indirectly,” Chinamasa said.

“We kept the deal under wraps to avoid the trap of sanctions. As you know, we are under sanctions and with the hostility that we have received, it was difficult to do business.

“Each time we said we were going to one country for business, lots of emails would be sent there and we would not get any favour from the hosts. So, we decided that it was best to keep our heads cool and remain focused until the deal was done,” he claimed.

The Treasury chief also said ZALC would lease the new planes to Zim Airways — adding that the company was formed after realising that there was no future for the debt-ridden flag carrier, Air Zimbabwe.

The landed Boeing 777 is one of four planes which were purchased from Malaysia Airlines and is already registered as Flight Z-RGM, a short code for Zimbabwe-Robert Gabriel Mugabe.

Gumbo has consistently said ZALC was owned by Zimbabweans living in the Diaspora and that it had funded the purchase of the planes.

“So I started negotiations to buy, and so I informed government that I had clinched a deal with Air Malaysia to buy four Boeing 777 planes at $70 million for all of them and I thought this was a good deal for Zimbabwe. But again, government failed to raise the money. I was buying these for Air Zimbabwe.

“So, after government introduced the policy to engage the Diaspora to invest in the country, I reached out to them. There was a group in London and another in Dubai.

“I engaged them to say here is an opportunity if you are interested. My role as minister of Transport is to ensure that there is activity in the country. Therefore, I facilitated for one of these groups to negotiate with Air Malaysia through PWC (Price Waterhouse Coopers auditors).

“This group then formed the Zimbabwe Aviation Leasing Company. They have now managed to purchase some of the planes. They have now paid for two planes and they are raising money to pay for the other two.

“The agreement is to purchase four,” Gumbo told the Daily News last year when he was quizzed about his involvement in the Zim Airways deal.

In the meantime, the Daily News was told authoritatively on Tuesday that the government had been planning to impound all the aeroplanes bought by Zim Airways, as part of establishing who owned the airline and how it was funded.

Zim Airway made an upfront payment for two aircraft to the tune of $36 million.

The government’s tough stance on the Zim Airways deal came as Air Zim is now barely managing to carry its domestic and international passengers, who are increasingly enduring horrendous flight cancellations and reschedulings.

And although Air Zim’s fleet supposedly comprises 10 “active” aircraft — two Boeing 767s, three 737s, three MA60s and two Airbus A320s — well-placed sources recently told the Daily News that the  debt-ridden national airline now only had three of these in the air, servicing both its domestic and regional routes.

Air Zim has over the past three decades struggled to shake-off claims of gross corruption and ineptitude, which has led to the dismissals of several of its boards and senior managers.

The airline is said to be losing up to $3 million a month, in addition to being saddled with a $300 million declared debt.