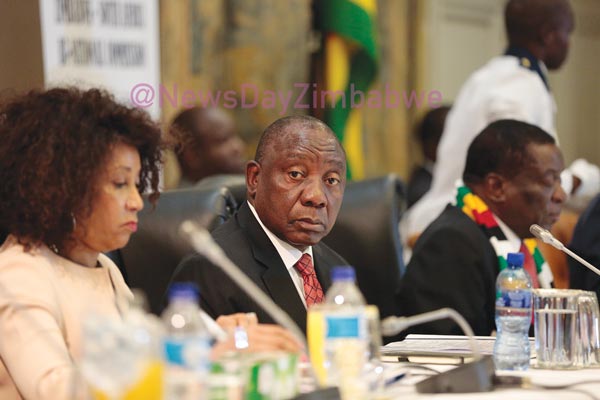 SOUTH African President Cyril Ramaphosa has said negotiations for a financial rescue package for Zimbabwe were still on-going, adding he was optimistic that a deal would be struck after the Zimbabwe-South Africa Bi-National Commission (BNC) Summit which closed in Harare yesterday.

Addressing the summit’s closing ceremony, Ramaphosa said he was hopeful that South Africa would assist Harare to navigate through its economic woes.

“The matters that you are raising, that you referred to as financial assistance; we have discussed that in great detail and our discussions are on-going and our various teams are busy finding workable solutions and because of the strength of our relations, we have no doubt whatsoever that we are going to find solutions that lead to the strengthening of our two respective economies so that we can address the challenges that face our countries,” Ramaphosa said.

Ramaphosa said he was committed to assist Harare.

At least 45 memorandums of understanding have been signed and these include rail development and the establishment of a one-stop border post at Beitbridge Border Post, among others.

The South African leader said he would support Zimbabwe’s call for the removal of sanctions against President Emmerson Mnangagwa’s regime, saying Harare deserved the world’s support.

Ramaphosa has used every international platform afforded to him to demand the unconditional removal of Western-imposed sanctions against Zimbabwe.

He hailed the European Union for not including fresh names on the sanctions list.

“We want much more than just that. We want to see meaningful support being given by the international development partners to Zimbabwe; for Zimbabwe deserves the support by the world,” Ramaphosa said.

“Today, we reiterate South Africa’s commitment to working with Zimbabwe in addressing the socio-economic challenges experienced by our two countries.

“We commend your new administration for all your efforts through your programme of action to take Zimbabwe out of its current difficulties and make it a viable partner to South Africa, to the region and other development partners.”

Mnangagwa said South Africa had a big role to play in helping Zimbabwe in the face of global animosity.

“We are determined to use our domestic resources as a country to grow our economy, to modernise our economy. We are happy that our sister member States in Sadc are in full support of our endeavour to resuscitate our economy and grow and modernise it in pursuit of the industrialisation policy of Sadc,” the President said.