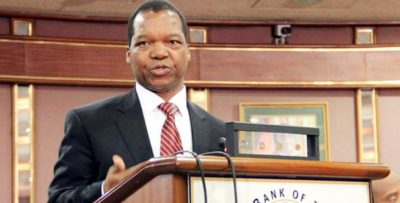 ZIMBABWE’S banking sector posted a combined ZW$15,1 billion (US$176,2 million) net profit during the first half of the year, after riding out headwinds posed by the deadly Covid-19 pandemic, Reserve Bank of Zimbabwe (RBZ) governor John Mangudya (pictured) said yesterday.

The sector had posted ZW$13,5 billion (US$157,5 million) during the same period in 2020, according to Mangudya, who presented the Mid-Term Monetary Policy Statement in Harare yesterday.

Mangudya said the banking sector remained adequately capitalised, with aggregate core capital of ZW$57,54 billion (US$670,9 million) as at June 30, 2021.

The banking sector average capital adequacy and tier one ratios of 35,32% and 25,05% respectively, were above the regulatory minima of 12% and 8%, respectively.

He said the role of the Zimbabwe Asset Management Corporation (Zamco) in improving the banks’ asset quality had been phenomenal.

The central bank chief said the acquisition of non-performing loans (NPLs) by Zamco helped improve and enhance the capital adequacy and earnings of banks through removal of toxic assets and replacing them with risk free assets.

“Zamco has managed to pay off its obligations of ZW$1,2 billion (US$14 million) to the government ahead of the sunset time of 2025 and plans to wind off its operations in line with Section 57A of the RBZ Act are underway,” Mangudya said.

“In line with the Monetary Policy Statement of August 2020, banking institutions submitted updated capital plans to the bank as at 30 June 2021, which were reviewed for credibility. The bank established that banking institutions are making significant progress towards meeting the new minimum capital requirements which are effective 31 December 2021.

“The strategies being pursued by banking institutions to comply with the new minimum capital requirements are largely based on organic growth and capital injection by the shareholders.”

Currently, the RBZ, in consultation with the Deposit Protection Board, is exploring mechanisms to protect foreign currency deposits.

“In addition, consultations are also ongoing to encourage banks to leverage on the foreign currency deposits to enhance financial intermediation for the benefit of the economy. These measures will allow the circulation of the US$1,7 billion currently sitting in foreign currency accounts, to promote growth and development,” Mangudya said.

Meanwhile, the average prudential liquidity ratio for the banking sector remained largely stable at 66,89%, which was above the minimum regulatory requirement of 30%.

The high average prudential liquidity ratio largely reflects the conservative approach to lending by the sector.

“The performance of loan portfolios of banking institutions was satisfactory as reflected by the average NPLs to total loans ratio which remained low at 0,55% as at 30 June 2021, against the international benchmark of 5%, reflecting sound credit risk management systems and internal controls. In the outlook period, credit risk is expected to remain low,” Magudya said.