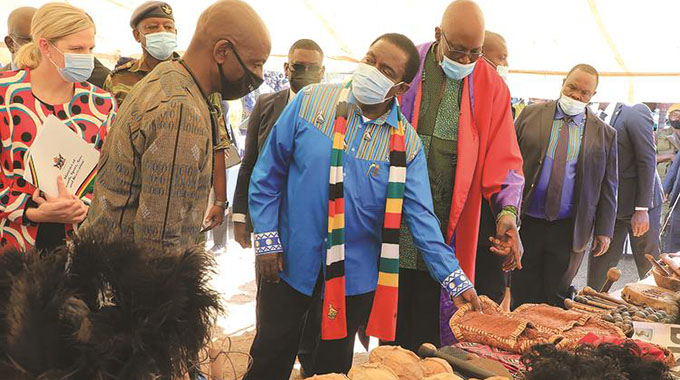 President Mnangagwa gets a feel of a jacket made of tree bark while Chief Njelele (on the President’s left), Youth, Sports, Arts and Recreation Minister Kirsty Coventry and National Arts Council of Zimbabwe director Nicholas Moyo look on during the National Culture Commemorations Day at Chief Njelele Homestead in Gokwe yesterday. — Picture: Tawanda Mudimu

Political Editor
EARLY in the morning yesterday, hundreds of people from across the country thronged Chief Njelele Homestead in Gokwe South to bear witness to the launch of the Cultural Week commemorations where Zimbabwe’s rich cultural history was on display.

The young and old, women and men including Tongas, Kalangas and Karangas among others, all plodded the dusty road that leads to the Chief’s home as Zimbabwe, led by President Mnangagwa, joined the rest of the world in savouring the uniqueness of each and every society.

The drums beat to fever pitch, with the riveting sounds of mbira giving the whole orchestra of traditional instruments a beautiful medley that transported some back into time.

It was a Zimbabwean culture on display, spoilt of course by time vicissitudes, but still stubbornly retaining the identity that embodies a nation and defines the people who live nestled between the mighty Zambezi River to the north and Limpopo to the south, from the east to the west.

The mbiras, magagadas and hoshos are all part of instruments that the people of Southern Africa, Zimbabwe in particular have played since time immemorial, be it at rainmaking ceremonies, in merriment and even as spices to dirges when the grim-reaper snatched loved ones.

“The recognition of Zimbabwe’s iconic mbira instrument making and playing by UNESCO as a World Intangible Cultural Heritage of Humanity is commendable. Going forward, efforts must be put in place to promote the instrument and derive economic value from it,” said the President.

Mr Fadious Chakaraya, who is into making soft drinks, said his desire is to ensure that when children are born, they have a balanced organic diet that is free of impurities.

“I make my drinks from sweet potatoes and pumpkins, the idea is to have something that is natural, cheap and accessible. Hopefully our nation will embrace our homegrown products,” said Mr Chakaraya who is also a village health worker with a strong appreciation of a healthy lifestyle.

It was not only the food that was exhibited but also the traditional medicines, that have been used from time

“We have traditional medicines that I strongly believe can work against diseases such as BP, asthma and diabetes. We also have aphrodisiacs that do not have side effects, people must turn to our medicines that are abundant in our country,” he said.

On his part, Innocent Shoshore (26) believes that traditional instruments such as mbira, drums, marimba and magavhu should be preserved for generations to come as they are unique and provide a rich cultural heritage that is also fused with a healthy lifestyle.

“I make traditional instruments; I was born in a family that is traditional. I make drums, hosho, hwamanda and other instruments that I sell to churches and cultural groups. These instruments were used by our forefathers on different occasions, such as mukwerera, pfonda, and magadziro as we remembered loved ones,” he said.

Mrs Mucharaziva who was exhibiting traditional foods such as mutsine (black jack) said it is time that families embrace traditional cuisine for the nutritional and medicinal value they contain.

“Foods such as mujimbura are good at fending off diseases. If you look back, diseases that never used to affect people back in the day are now common. This is partly because we have abandoned our ways and we are now following other people’s culture,” said Mrs Mucharaziva.

Apart from the food, medicines and instruments, artists belted out enchanting traditional songs, that mesmerised the sizeable crowd and left many asking for more.

Songs like “Chigwaya”, a powerful traditional tune that overflows with patriotism and ubuntu were belted out with the sounds of the mbira standing out.