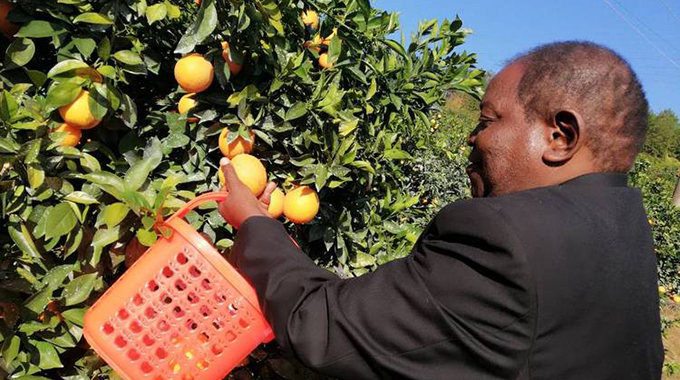 Zimbabwe and China are set to sign a citrus fruits export deal that Zimtrade has described as ‘farming industry transforming.’

The deal, which will further entrench economic corporation between the two countries, is set to open up a new frontier for locals who have previously relied on the European market.

The consummation of such agreements, is in sync with Government’s export development strategy under the National Development Strategy 1 (NDS1 2021 to 2030).

NDS1 is the economic blueprint with which Government expects to foster rapid economic growth towards an upper middle income economy by 2030 as set by President Mnangagwa.

Growing value added exports, both by quantity and variety, is at the core of this development strategy.

The country’s export development and promotional agency, ZimTrade, is negotiating with Chinese authorities on behalf of Government and deal announcement is now imminent.

In an interview with The Sunday Mail Business, ZimTrade chief executive officer Allan Majuru, said such a deal will give local farmers access to a market worth US$500 million annually.

He said the deal was meant to bit market barriers that exporters encounter.

“. . . for exports to take place, there are government to government protocols that govern the movement of agricultural produces and other products,” Mr Majuru said.

“On the citrus protocol with China, this is expected to open up direct access to a huge market for local farmers.

“The good thing about Zimbabwe taping into the Chinese market is that it will ease the over reliance on the European market, allowing the country to diversify and hedge against price volatility by concentrating on one market,” he said.

Under the protocol, Mr Majuru said, citrus fruits to be exported to China, include orange, mandarin, lemon, grapefruit, limes, tangelo and grapefruit.

Local farmers’ prospects are further boosted by the fact that different varieties of citrus that are grown in Zimbabwe are in demand the world over.

However, the ZimTrade boss notes, despite the present demand the exports promotion agency is constantly looking at market trends to ensure that Zimbabwe continue producing new varieties that are growing in demand.

Examples include the growing demand for soft citrus as well as that for lemons and limes.

Citing the Trade Map, ZimTrade notes that in 2019 China imported citrus fruits worth around US$594 million.

The figure shows that the Chinese market has the wherewithal to make huge impact on Zimbabwe.

The bulk of their present imports come from South Africa.

No official comment could be obtained from the Chinese Embassy, with an official who declined to named insisting details would be release in due course.

Zimbabwe has climatic condition that allows the growing of many fruits and vegetables on high demand the world over.

The country is a major supplier of fresh produce to many countries in Europe and cargo planes have never stopped coming to Zimbabwe to collect the products ever-since some of them imposed economic sanctions on Zimbabwe two decades ago.

Some indigenous farmers have taken a driving seat in the agriculture sector and have demonstrated their prowess in tobacco, horticulture and other foreign currency spinning crops.