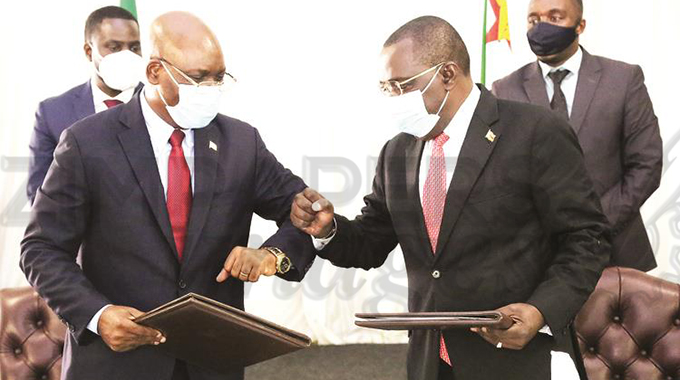 Mukudzei Chingwere Herald Reporter
Zimbabwe and Equatorial Guinea yesterday signed bilateral agreements that will enhance economic cooperation between the two, anchored on higher and tertiary education and other areas of commercial cooperation.

This comes as Zimbabwe is considering opening a diplomatic mission in Malabo, Equatorial Guinea.

Zimbabwe hosts 123 students from Equatorial Guinea in its universities and is ready to accept more.

“It is our desire that we enhance our cooperation by deploying our diplomatic missions in Equatorial Guinea. It is a matter we will discuss further, the two of us. We have a lot of joint activities which require an embassy, maybe in the interim we can establish a consul or a smaller mission there,” said Dr Moyo.

Minister Moyo said the visit by the West African country’s delegation should set in motion stronger ties between the two countries.

“The visit concretises a symbiotic relationship which resonates with the visions of both countries. President Mnangagwa was very clear that he wanted this committee of ministers to undertake and explore, dissect and come up with pragmatic solutions in order to move the economic relationship between the two countries forward,” he said.

“We recommend that you establish an embassy for the Republic of Zimbabwe in Equatorial Guinea. We have an embassy here which has been there for four years. Your embassy is in Angola, sometimes it is very difficult for us to execute cooperation ties,” said Mr Oyono.

Prof Murwira said 11 different local tertiary institutions have a combined 123 students from Equatorial Guinea and requested for more to come as the countries continue enhancing ties.