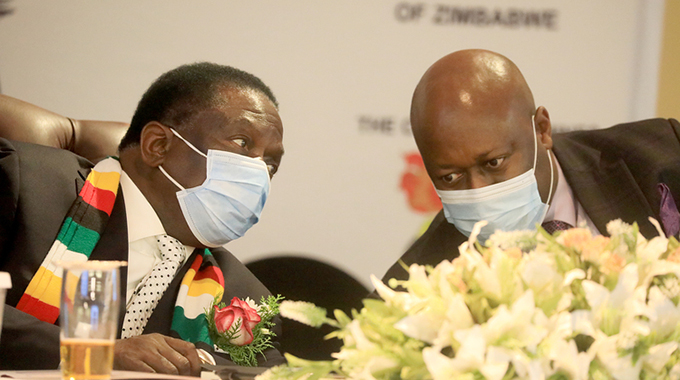 DESPITE the Covid-19 pandemic and its negative effects on the country, Zimbabwe is edging closer to achieving its goal of becoming an upper middle income economy by 2030 anchored on a resilient mining sector, President Mnangagwa said.

This follows key interventions by the Government which have seen the critical mining sector operating on full capacity notwithstanding the Covid-19 pandemic.

It also comes as the Government’s engagement-and reengagement policy is bearing fruit with investors lining up to plough resources not only in the lucrative mining sector but across the facets of the economy.

Officially opening the Chamber of Mines Annual General Meeting and Conference in the city of Victoria Falls, the President said Zimbabwe adopted a new normal which saw the country incorporating processes, procedures, protocols as well as health and testing equipment that affected the country’s economic sectors.

“Notwithstanding this, hope is not lost. Our significant deposits of over 60 exploitative minerals remain intact, making prospects for the mining sector to ensure sustainable economic development, growth and prosperity remain bright.

“Due to this diverse mineral endowment, investment opportunities abound across the entire mining value chain, which should ensure that the sector continues contributing over 60 percent of Zimbabwe’s export receipts and provide significant employment opportunities.

“The sector continues to steadily gravitate towards the attainment of its goal of a US$12 billion mining industry by 2023 through green field and brown field investments.

“The institution of various measures targeted at attracting investments, enhancing exploration activities, as well as opening of new and idle mines is set to further augment ongoing efforts.

“This should see Zimbabwe edging closer to the goal of being an Upper Middle Income Country by 2030, while simultaneously addressing the global aspirations of the Sustainable Development Goals (SDGs) and Africa Agenda 2063,” said the President.

Towards this goal, the mining sector, the President said, should always be guided by the Africa Mining Vision and the country’s economic development blueprint, the National Development Strategy 1, is “challenged to ensure equitable and inclusive broad based development through enhanced beneficiation of our economic endowments”.

“This will argument the Industrial Development Policy to focus on value addition and beneficiation; export-led industrialisation, and modernisation, among others.”

Further, the President said there was a need to speedily establish beneficiation plants as this will increase the country’s revenue base as well as create employment.

“The construction of base and precious metal refineries will create jobs and stem the export of local employment opportunities,” he said.

Such initiatives have been registered in the high carbon ferrochrome industry where chrome smelters are being pitched as the private sector heeds the Government’s call.

“A number of projects are also taking place in coal mining. In this regard, the production of coking coal provides the critical feedstock for imminent increased power generation facilities.

“The Arcadia Lithium project is one of the notable value addition projects which should see the development of lithium ion batteries among other components,” he said.

The engagement and re-engagement drive adopted by President Mnangagwa at the inception of the Second Republic is now bearing fruit with multi-million-dollar investment projects such as the Caledonia Mining Corporation, Shamva Gold Mine, Eureka Gold Mine, Bravura, Anjin Diamond Mine and Tshingshan having already taken off.

Government is also carrying out major infrastructural development projects with roads being rehabilitated while being on course to become a net exporter of electricity.