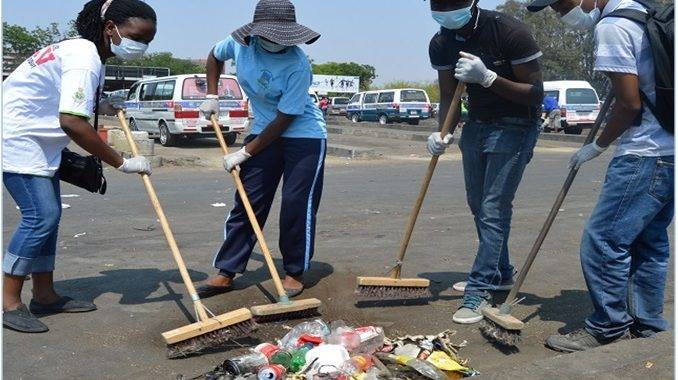 Almost a year ago, President Emmerson Mnangagwa launched the National Environment Cleaning Day, declaring his Government’s commitment and desire to provide a clean environment through a sustainable waste disposal programme.

The President stressed the importance of a clean environment.

“The world we live in is deteriorating rapidly due to the dire consequences of climate change which manifests as floods, heat waves, diseases, water and air pollution, land degradation and desertification among other challenges,” he declared.

“These developments require us to take bold and decisive action with regards the management of our environment of ensuring a clean environment.  We need to keep our villages, towns and cities clean and hygienic, both for this generation and generations to come.

“We must, therefore, be reoriented to practise good environmental and waste management through increased advocacy, education, training and awareness.”

Since then, between 8am and 10am of every first Friday of the month, Zimbabweans in all parts the country participate in a nationwide clean-up exercise.

Themed “Zero tolerance to litter: My environment, my pride”, the campaign is now nearly one year old.

According to the Environmental Management Agency (EMA), Zimbabweans, particularly corporates, have been at the forefront of driving the initiative.

EMA environmental educational and publicity manager Ms Amkela Sidange says there was a surge in the adoption of certain sections of road islands by corporates, a move stemming from the National Environment Cleaning Day.

“We have observed that there is a behavioural change in communities and the corporate world since the introduction of the National Clean-up Day,” she explained.

“We have more corporates coming to support the initiative, they have formed structures and most of them no longer wait for the first Friday of the month.

“There has also been an increase of corporates adopting road islands. For example, if you look at road islands in Samora Machel Avenue; this has been done to complement the clean-up campaigns.”

“We are also witnessing communities in the residential suburbs who are complementing the initiative of these clean-up campaigns.

“In areas such as Sunningdale high- density suburb in Harare, there are communities that observe the first Friday of every month and hold clean-up campaigns voluntarily.

“We are hoping such initiatives cascades to other residential areas across the country.”

The campaign is modelled on the “Umuganda” — a community clean-up held on the last Saturday of every month in Rwanda.

But in Rwanda, the clean-up is not a volunteer project, officials monitor participation.

Police can stop Rwandese who are not participating and order them to undertake any clean-up on the spot.

Small fines are also charged for not participating.

The Rwandese government institutionalised a clean-up campaign strategy which makes it compulsory for all able-bodied people between the ages 18 and 65 to participate in the national clean-up campaign.

Rwanda has also banned the use of plastics. This approach has seen the country being renowned throughout the world for its cleanliness.

Admittedly, in Zimbabwe, participation is yet to reach the Rwandan levels

It is still largely a programme for officials and corporates, with negligible buy-in from the public.

He, however, said the increase in the number of participating corporates was encouraging.

“We have noticed that there is an increase in the number of individuals and corporates that participate on the day,” said Mr Chideme.

“Council has not done any behavioural change analysis. However, we have noticed that people are still littering as evidenced by the amount of dirt that is in the streets around 11am in the CBD everyday.

“The existing by-laws are being enforced and we are working with EMA and the ZRP.  As council we do not have arresting powers.”

In 2017, the Government banned the use of polystyrene material, commonly known as kaylite, and related plastic packaging citing health hazards and pollution.

“There is an improvement in recycling of plastic bottles,” she added. “This complements the clean-up campaigns.”

Zimbabwe is preparing for another clean-up on December 6.