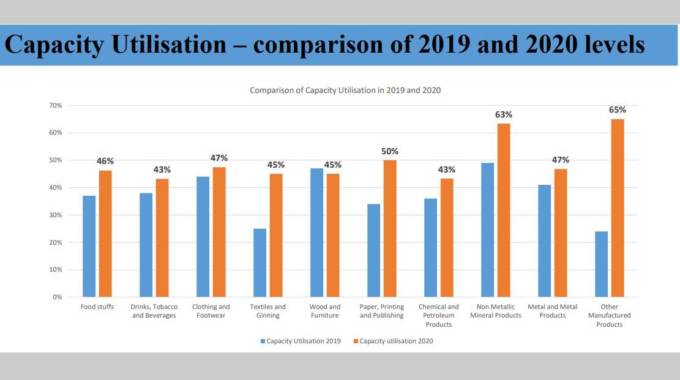 Zimbabwe’s economic story is a tale of many turns.

Even economists and critics like US-based Johns Hopkins Professor Steve Hanke have tripped over their own projections countless times.

While the odds were heavily staked against local industry, especially with the coronavirus pandemic that was largely expected to weigh on the local economy, the manufacturing’s sector has been performing better than expected.

Local products now occupy about half of supermarket shop-shelves.

On March 12, President Mnangagwa tweeted: “In 2017, 5 percent of stock in Zimbabwe’s supermarkets was locally manufactured. Today, 45 percent of our supermarket supplies are proudly made in Zimbabwe. The worst of our economic woes are now behind us. Zimbabwe shall rise once again!”

In its 2020 CZI State of Manufacturing Report, the business member organisation observed that there had been a marked improvement in capacity utilisation – the degree to which a company uses its productive assets – in industry.

Relatively higher capacity utilisation allows companies to enjoy economies of scale and charge lower prices as costs will be spread over more products.

According to CZI’s chief economist Mrs Tafadzwa Bandama, Zimbabwe’s capacity utilisation grew by 11 percentage points to 47 percent in 2020 from 36,4 percent in 2019.

“The market-based exchange rate system has assisted in dampening pressures on inflation. As of February 2021, more than 70 percent of total foreign currency allotted had gone towards the importation of raw materials, machinery and equipment . . .  The official exchange rate became the major determinant in the pricing equation,” said CZI in the report.

Market watchers say there is now improved predictability in the market, allowing for better decision-making.

Some of the well performing sub-sectors include those that manufacture foodstuffs, drinks, tobacco and beverages, clothing and footwear, textiles and ginning, and wood and furniture.

The region is slowly taking notice of the strides being made by Zimbabwe.

In its 2021 African Economic Outlook, which was released on March 12, the African Development Bank (AfDB) said “the weekly forex auctions, introduced in June 2020, could create price stability and create room for modest economic recovery”.

It expects the economy to grow by 4,2 this year, which is lower than the country’s forecast of 7,4 percent.

The growing presence of local goods in retail outlets represents a sea-change from the dollarisation era when supermarkets were filled with imported products, particularly from South Africa.

Buy Zimbabwe chair Mr Munyaradzi Hwengwere, whose advocacy group celebrated its 10th anniversary, said the turn of fortune is a product of the political will shown by the Second Republic.

“You can now go in shops and now identify a Zimbabwean product which is sustainably produced and has standards. There is obviously more that needs to be done but there has been plausible progress,” said Mr Hwengwere.

“President Mnangagwa has always supported us, from the days he was Vice President . . . When he became President, the first official event he attended were Buy Zimbabwe Awards in Mutare.

‘‘This showed us that we are in good hands.”

Industry and Commerce Minister Dr Sekai Nzenza told The Sunday Mail that it was in the country’s best interest to increase production.

“Local brands now take up 45 percent of the shelf space in our supermarkets, and the trend is expected to continue under the Government`s economic blueprint, the NDS (National Development Strategy)1. There are clearly indubitable benefits to be derived from this. As a country, we save the scarce foreign currency we have and channel it towards procurement of essential raw materials and equipment needed for retooling our industries. By producing local and buying local, we also create jobs, wealth and pride in our products,” she said.

There are currently concerted efforts, Dr Nzenza added, to ensure that small and medium enterprises are not left behind.

Increased activities are also pushing local firms to venture into the region as well.

Recently, four local companies – National Foods, Lake Harvest, Kefalos and Delta – made it into the Top 100 Food Companies in Africa 2020, which is compiled by the Kenyan-headquartered Food Business Africa Magazine (see The Sunday Mail Business Page 1).

Adoption of the local currency after a 10-year hiatus has made local companies more competitive in the region and beyond. Zimbabwe aspires to become an upper middle-income economy by 2030.

“By crawling, a child learns to stand,” reads one of the most poignant age-old African adages.

The progress made so far cannot be taken for granted as it has a bearing on the day-to-day lives of ordinary Zimbabweans.