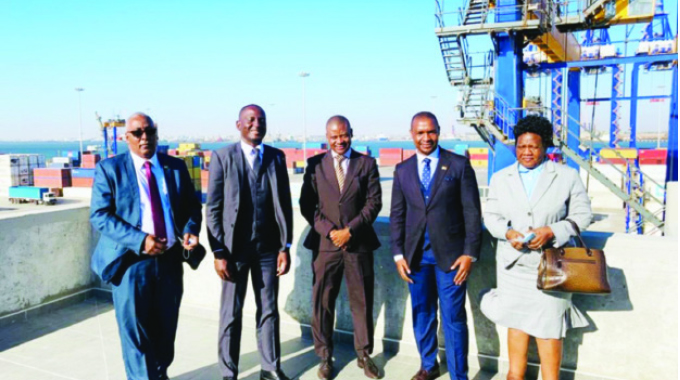 Zimbabwe and Namibia have launched a joint bid to promote and market the newly established dry port facility in Walvis Bay.

Roadshows to promote the dry port which belongs to Zimbabwe will be held over the next two months.

President Mnangagwa and President Hage Geingob of Namibia are supportive of the roadshows.

Last Friday, Transport and Infrastructural Development Minister Felix Mhona had a working visit to Walvis Bay to understand the progress made so far in the development of infrastructure, installation and enhancement of systems at the dry port to facilitate trade, and the challenges being faced.

The knowledge would then galvanise Zimbabwe to swiftly formulate short, medium and long-term robust strategies to enable it to be not only land-linked, but sea-linked to the transatlantic markets including West Africa, the Americas, the Far East and Europe.

Minister Mhona said cooperation between Zimbabwe and Namibia “is historic” and already, there is cooperation on various social, economic and political fronts.

“Most strategically, I am told that our two sister countries are currently working on strengthening trade between them, by promoting the utility of the transport logistics of Trans-Kalahari and Lumbumbashi routes, to and from the Walvis Bay Port, and in the process promoting the use of the Zimbabwe Dry Port.

“This, I know, and as we shall fully establish, is being spearheaded under the auspices of the proposed Walvis Bay Corridor Group. All this speaks volumes of our well-stablished cooperation,” said Mr Mhona during the bilateral meeting in Walvis Bay last Friday.

The strengthening of relations with Namibia comes as Harare is on a drive to engage and re-engage all countries as it seeks to normalise relations, which could be useful in the attainment of an upper middle income society by 2030.

Zimbabwe got a 50-year lease of 1,82ha for the construction of a dry port facility in Walvis Bay, which is expected to provide a strategic and cheaper gateway to the Atlantic Ocean for Zimbabwean manufacturers and international businesses.

Minister Mhona said access to the dry port opens business opportunities and markets for the two countries to trade in fish, beef, salt, granite and other minerals.

The development is in sync with the aspirations of the SADC Protocol on Transport, Communication and Meteorology of 1996, which ideally seeks to remove trade barriers in the region through trade facilitation.

Erongo Region Governor Neville Andre said Namibians consider Zimbabwe as a “great friend and neighbour”, and Minister Mhona’s visit provided another opportunity to “renew and strengthen the historic bonds between our two countries, solidified during the liberation struggle”.

“Today the struggle we wage is not for liberation but against the triple challenges of poverty, inequality and unemployment. Furthermore, I am quite encouraged that since the inception of the Namibian–Zimbabwean Diplomatic and Political Consultation as well as the Namibia-Zimbabwe Joint Commission of Cooperation, (our relations have) been going on uninterrupted,” said Governor Andre.

The last Joint Commission of Cooperation focused on critical matters affecting bilateral cooperation between the two countries in a wide range of areas including transport, energy trade, investment and agriculture.

He added that Zimbabwe’s Dry Port was operational but conceded that it required effective marketing.

“I would like to join our Head of States in welcoming the planned roadshow initiative, which will take place in June/July 2021 aimed at promoting and marketing the potential that the Zimbabwean Dry Port Facility holds, through the Trans-Kalahari corridor to Zimbabwe.

“The Erongo Region further commits itself to avail all the necessary assistance and support to ensure a successful roadshow exercise,” he said.

Governor Andre said since the dry port’s commissioning in 2019, increased volumes of cargo have been witnessed even during the Covid-19 lockdown.

He thanked Zimbabwe for airlifting, for free, the Covid-19 vaccines donated by China to Namibia.

Zimbabwe and Namibia have solid relations and the two countries held a virtual Joint Permanent Cooperation Commission (JPCC) from 24 to 25 April 2021, which has since been elevated to a Bi-National Commission (BNC), to strengthen the well-established all round relations.

The two countries have moved together on a number of regional integration initiatives under the framework of the SADC Vision 2050 and Regional Indicative Strategic Development Plan 2020-2030, which were approved by the 40th Ordinary SADC summit on August 17 last year.

The SADC Vision 2050 is premised on three pillars which include infrastructure development in support of regional integration, which Zimbabwe and Namibia are vigorously pursuing through initiatives such as the refurbishment of ports.

The Bilateral Air Services Agreement cooperation between Zimbabwe and Namibia is progressing well, notwithstanding the temporary hiccup of suspended flights due to Covid-19 restrictions.

Although Air Namibia has not been servicing the Harare- Victoria Falls-Windhoek route due some challenges, Namibia remains committed to the agreements between the two sister countries.