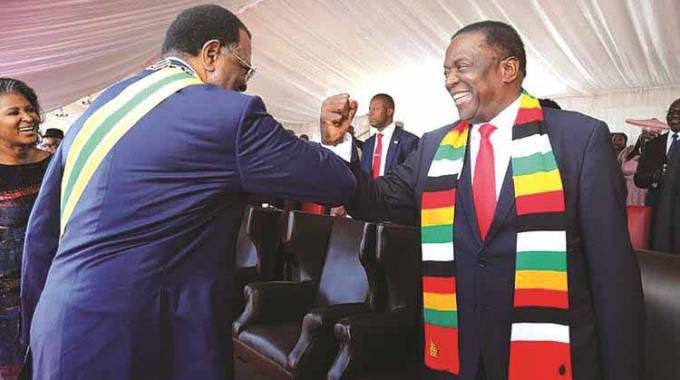 Speaking at Namibia’s 30th independence celebrations in Windhoek yesterday, President Mnangagwa — who is the chairperson of the SADC Organ on Politics, Security and Defence Cooperation — said the two countries would cooperate in deepening regional and continental integration.

The celebrations also coincided with the swearing-in ceremony of Namibian President Hage Geingob for his second and final term.

“We would like to offer to you our most sincere wishes for a successful second term as the president of Namibia. I am confident that under your renewed presidency, Namibia will make great strides towards the achievement of its aspirations and in particular the attainment of strategic development goals, during this ‘Decade of Action’,” he said.

“We will stand with you in our common quest to consolidate and deepen regional and continental integration, more so in the wake of present threats such as Covid-19 as well as future challenges,” the President added.

He also expressed the country’s gratitude for Namibia’s continued push for sanctions imposed on Zimbabwe by the United States of America and the European Union (EU) to be lifted.

In his acceptance speech, President Geingob pledged to intensify the fight against corruption and gender-based violence.

He also urged the country to unite to successfully fight the novel coronavirus.

“It is a pernicious enemy that threatens all of us. In order to fight this invisible enemy, we must rise as one. We must emulate the brave deeds of thousands of Namibian men and women, who from all corners of our country, rose as one people to defeat the brutal apartheid regime. Although the enemies we face today may be different, the resolve of the Namibian people remains as strong as ever,” President Geingob said.

Yesterday’s ceremony was shadowed by the coronavirus outbreak, which forced Windhoek to cancel the planned national gathering to commemorate the country’s milestone three decades of independence.

The country has recorded three cases of coronavirus to date, which are all imported.

Funds that were meant for the independence celebrations have since been channelled to fight the disease.

The country recently opened a dry port facility at Walvis Bay on land that was donated by the Namibian government.

The facility is expected to provide a strategic and cheaper gateway to the Atlantic Ocean for local manufacturers and international businesses.

President Mnangagwa travelled and returned from the neighbouring country yesterday.

He was accompanied by Minister of Defence and War Veterans Affairs Oppah Muchinguri-Kashiri and Deputy Chief Secretary to the President and Cabinet (Presidential Communications) Mr George Charamba.