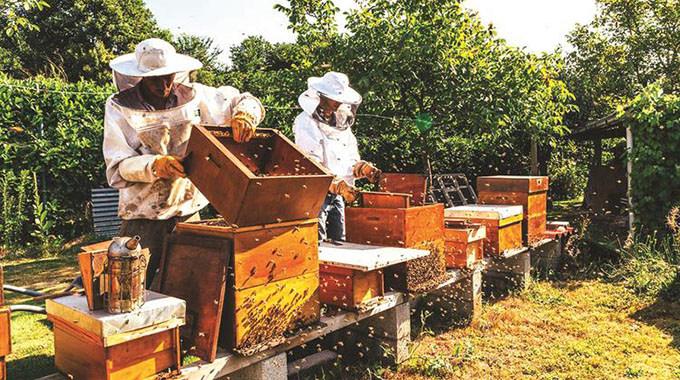 Bee-keeping can contribute to household income

GOVERNMENT, in partnership with the Common Market for Eastern and Southern Africa (Comesa), recently engaged a consultant to develop the apiculture sector in an effort to boost bee-keeping in the country.

Zimbabwe’s apiculture sector has the potential to drive the country’s economic prospects towards poverty reduction, while contributing to food security and earning the country foreign currency when commercialised.

The country has a long history of bee-keeping but production remains low, missing on the opportunity to export the product.

“Apiculture’s contribution to livelihood of people has been minimal. The growth of the apiculture sector has for a long time been compromised by weak instructional arrangements, weak capacity, and coordination and policy-related issues, which require reviewing and strengthening.”

This agriculture sub-sector offers a window for passive household income and according to the statistics provided by Zimbabwe’s trade development and promotion body ZimTrade, an average colony produces between 27kg and 45kg of honey.

ZimTrade said there is an increase in demand for honey and bees wax for industrial use across the world with most food processing, pharmaceuticals companies now preferring to use honey because of its unique flavour, taste and healing properties.

According to Trade Map, the United States of America was the largest importer for honey with a world market share of 24,3 percent in 2017, followed by Germany and Japan with 12,1 percent and 6,1 percent market share respectively.

In the same year, the world traded over 700 000 tonnes of natural honey valued at over US$2,3 billion.

An opportunity exists for Zimbabwe to take advantage of Africa’s image as a ‘natural’ continent to increase our market share in the organic honey sector.

Honey offers some “sweet” export opportunities and the global honey market has more room to grow and exhibits a lot of untapped potential across the globe.

Since pre-historic times, honey has been used as both a food and a medicine as it is very rich in beneficial plant compounds and has numerous health benefits.

It is a healthier alternative to sugar.

Honey contains many vital antioxidants which have been associated with reduced risk of strokes, heart attacks and certain types of cancers.

It is believed that honey’s anti-bacterial and anti-inflammatory effects are responsible for its “healing powers” as well as its capability to nourish and heal surrounding tissue.