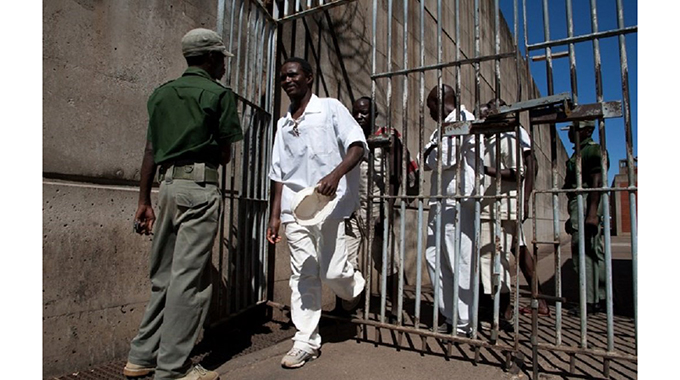 Zimbabwe has been applauded by the African Commission on Human and People’s Rights (ACHPR) for pardoning 1 955 inmates last month, in a move aimed at de-congesting prisons, especially during the Covid-19 pandemic.

In a statement yesterday, the Ministry of Justice, Legal and Parliamentary Affairs  said the ACHPR praised Harare through a joint letter written by the Commissioner Rapporteur on the Human Rights Situation in Zimbabwe, Ms Jamesina Essie King and Special Rapporteur on Prisons, Conditions of Detention and Policing in Africa, Commissioner Maria Teresa Manuela.

Since the outbreak of Covid-19, Zimbabwe has pardoned 5 878 prisoners.

Zimbabwe’s decision to pardon inmates “is firmly in line with the ACHPR Resolution 449 (LXVI) 2020 on Human and Peoples’ Rights as a central pillar of successful response to Covid-19 and recovery from its socio- political impacts”, said the ACHPR.

The joint letter of appreciation also comes at the backdrop of Zimbabwe having been applauded by the African Commission at its 65th Ordinary Session held in November 2019 for being up to date with its State Party reporting obligations under the African Charter on Human and Peoples’ Rights.

Zimbabwe ratified the ACHPR, which establishes the African Commission on Human and Peoples’ Rights.

The mandate of the African Commission on Human and Peoples’ Rights is to promote human and peoples’ rights and ensure their protection.

It was adopted at the African Commission’s 66th Ordinary Session of August 2020 where it was noted that people deprived of their liberty had a higher risk of contracting coronavirus.

Member States were urged to adopt appropriate emergency measures to reduce overcrowding in prisons and other places of detention.

President Mnangagwa, in a bid to de-congest prisons and mitigate threats posed by the Covid-19 pandemic to inmates, declared two amnesties in 2020 which saw 3 923 inmates being freed with 3 726 being males while 197 were females.

In March, President Mnangagwa declared another amnesty where 1 955 prisoners were released, 1 911 males and 44 females.

There were about 20 407 inmates in prison as of February this year, with 15 533 having been convicted, while 4 874 were still awaiting trials.