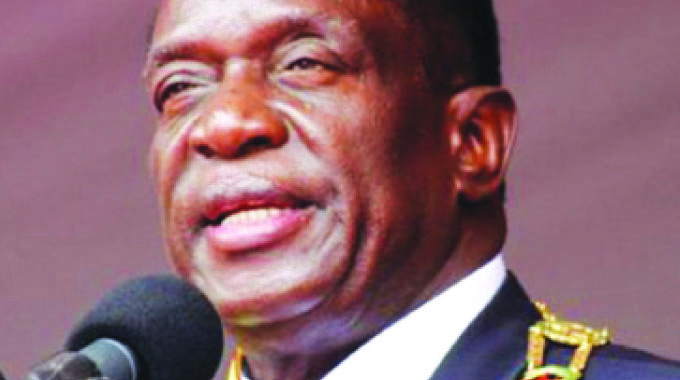 Martin Kadzere
THE reforms being implemented by Government to improve business environment will in short to medium term unlock funding for the economy, a report by the African Development Bank has said, while emphasising the need to tackle corruption and observe good governance for a sustainable economic recovery.

President Mnangagwa’s Government adopted Zimbabwe “is open for business” policy to woo investors and has put in place measures, among them currency reforms, which saw the re-introduction of Zimbabwe dollar to improve business climate.

As from June 24, 2019, the Government declared the RTGS dollar the sole legal tender, effectively abandoning multi-currency regime, which Zimbabwe adopted in 2009 when hyperinflation rendered the Zimbabwean dollar worthless.

The RTGS dollar was introduced in February as part of currency reforms, which began in October last year following the separation of FCA (Nostro) and RTGS accounts.

In its Zimbabwe Infrastructure Report 2019, which is to be officially launched in Harare today, the AfDB said the Government had implemented a number of reforms aimed at alleviating some of the constraints affecting businesses in the country.

“Important efforts are ongoing to improve access and affordability of basic physical infrastructure. In parallel, the Government is processing key reforms aimed at improving the business environment in the areas of the judiciary and administration of justice, the financial sector, the land tenure and mortgage regimes.

“These reforms should also improve the availability of finance,” said the AfDB. Further efforts were however, still needed to exploit growth potential of the rural economy, improve the regulatory and institutional framework, strengthen transportation links to neighbouring countries, and enhance education and skill development programmes.

The report noted that good governance was key for growth. “The Government effectiveness and control of corruption would have significant impacts on the economy.”

President Mnangagwa has since declared zero tolerance to corruption and recently appointed Justice Loice Matanda-Moyo as new chair for Zimbabwe Anti-Corruption Commission (ZACC) following the disbanding of the previous commission which he described as rotten to the core. ZACC now has arresting powers.

“Governance has a bigger effect in developing countries where the government tends to play a larger role in the allocation of resources. Competent and honest governments that efficiently deliver basic public services, such as administration, education, and health care, raise the productivity of all firms and industries.

“Such governments are also more conducive for political stability and a more benign investment climate.

“Increasingly, an important dimension of strong governance and institutions will be the capacity to deliver inclusive growth which spreads the fruits of growth to the wider population.”

There was also need to raise labour productivity and accelerate diversification.

Productivity growth will play a bigger role as a driver of economic growth, the bank said.

“Structural policies that promote productivity growth therefore hold the key to sustaining the country’s growth that, in turn, will reduce the numbers of the poor and spread the benefits of economic progress to more people,” said AfDB.

“As it emerges from this lost decade, medium- and long-run growth will reassert itself as the priority concern of policy makers. Short-term aggregate demand management will have to give way to structural policies that augment the economy’s productive capacity. It is thus a good time to take stock of Zimbabwe’s growth prospects further out and to reconsider its pathways to growth.”