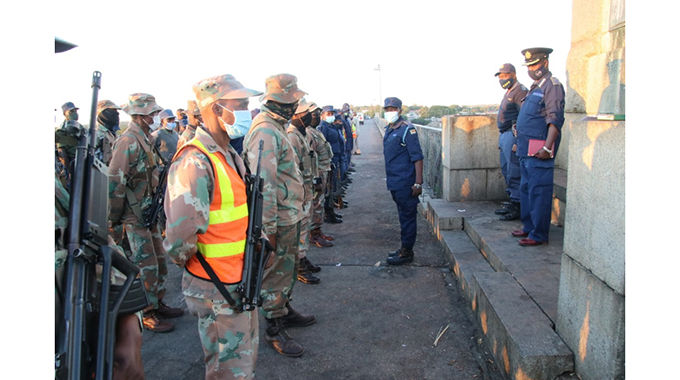 Over 300 suspects were on Thursday rounded up around Beitbridge border post and highways leading to both the Zimbabwean and South African sides during an all-female operation by security forces dubbed “Basadi”.

The simultaneous operation was conducted by female members of the police force and army from the two countries. It complements Zimbabwe’s operation, “No to cross-border crimes” and another in South Africa dubbed “Thatha Zonke” (Take everything).

“We are not relenting in our quest to bring sanity along the border with South Africa, where some criminal elements want to turn into their playground,” said Asst Comm Nyathi.

“We have resorted to collaborating with other security agents and our counterparts in South Africa to ensure that we don’t give the cross-border criminals breathing space.

“In the operation launched on Thursday, we managed to make cumulative arrests of 314 people.”

The suspects were arrested for possession of stolen property, possession of illicit cigarettes, traffic offenses and violating Covid-19 regulations, among others.

In addition, four bus crews were arrested while picking border jumpers at an illegal crossing point on South Africa’s side of the Limpopo River.

Asst Comm Nyathi urged Zimbabweans and foreigners to always adhere to set customs and immigration laws in the two countries.

Meanwhile, Beitbridge resident magistrate Mr Toyindepi Zhou ordered the deportation of 25 Malawian border jumpers who were intercepted by the Department of Immigration’s compliance and enforcement unit on Thursday.

The group was travelling from Harare to South Africa in an Intercity bus after sneaking into the country near an illegal crossing point at Nyamapanda Border Post.

Among the group, 16 immigrants had unstamped passports while the rest of the group was undocumented.