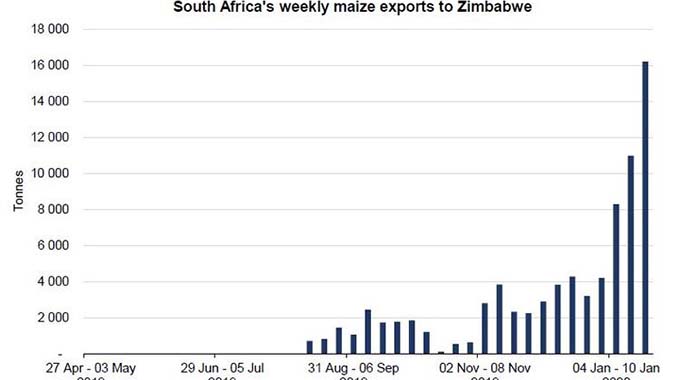 “This may not seem like a big volume, however, it was noticeable as it is South Africa’s largest weekly maize export sales to Zimbabwe since December 2013,” said Mr Sihlobo.

The imports, come at a time when the country is in need of maize imports following the drought experienced in the 2018/19 agriculture season.

According to data from the US Department of Agriculture, Zimbabwe’s need for maize imports was mainly caused by a poor domestic harvest which had fallen by 53 percent year-on-year in 2018/19 production season to 800 000 tonnes.

Mr Sihlobo is of the opinion South African stocks will not be sufficient enough to continue supplying Zimbabwe with large volumes of maize which it requires to sustain the nation.

“In the week of January 24 2020, South Africa had already exported to the global market 73 percent of the allocated maize for exports in the 2019/20 season which ends in April 2020. Zimbabwe was one of the smallest buyers, having imported only 79 283 tonnes of maize from South Africa between May 2019 and January 2020, as previously stated.

“This means that South Africa and possibly Mexico have now relatively tighter stocks compared to mid-year 2019 when it became clear that Zimbabwe would need to import a large volume of maize.

“Had the sales been facilitated then, Zimbabwe would have found abundant maize supplies in the market.

“The coming weeks will be interesting to watch where Zimbabwe sources its maize, and at what price,” he said.

Last week the Grain Millers Association of Zimbabwe (GMAZ) called upon local road transporters to provide cross border services for its maize import programme to quickly bring in maize into the country.

GMAZ said it had imported 50 000 tonnes of maize from South Africa, complementing Government efforts to try bring maize into the country.

The millers promised to make sure that the country is supplied with enough grain to sustain people throughout the drought, it said it will continue importing grains from Argentina, Ukraine, Mexico and other countries using free funds.

Meanwhile, the Government and millers plan to continue importing maize grain from South Africa, Ukraine and Mexico, which according to the United States Department of Agriculture both had about 1,2 million, 1,5 million and 25 million tonnes of maize for export markets in the 2019/2020 season respectively.