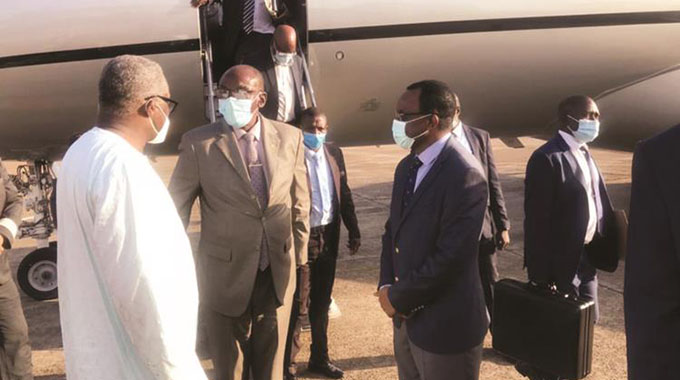 Africa Moyo in CONAKRY, Guinea
VICE President Kembo Mohadi arrived here yesterday for the inauguration of Guinea President Alpha Conde, and will take advantage of the visit to seek deeper bilateral relations with the country.

He was welcomed at the Conakry Gbessia International Airport by Zimbabwe’s Ambassador to Senegal James Maridadi, who also covers Guinea, and the host country’s Foreign Affairs Minister, Mamadi Toure.

The inauguration ceremony is scheduled for tomorrow.

In an interview after a closed door meeting with Ambassador Maridadi and Minister Toure, VP Mohadi said: “The purpose of this visit is to attend the inauguration of the President-elect, which is going to take place on Tuesday.

“We are definitely going to touch on a number of bilaterals. Our Ambassador (Maridadi) is here, even though he is resident in Senegal. He also deals with this place.

“So (in the closed door meeting), they were telling me how the elections went; (and) they were declared free and fair by the AU (African Union) and Ecowas and everything is   okay.”

President Conde romped to victory in the October elections with 59,5 percent of the vote.

However, the constitutional court threw out the allegations of fraud.

The court then declared President Conde the winner.