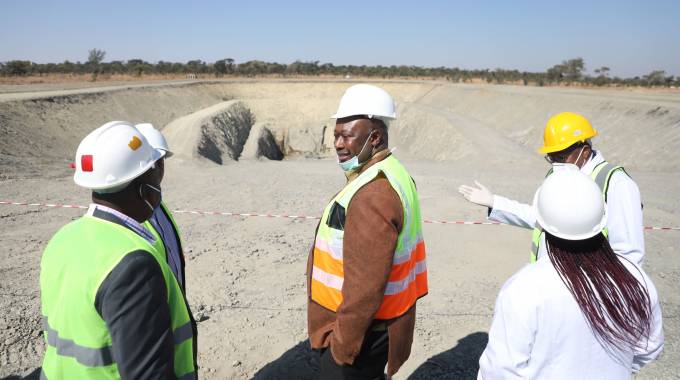 THE Great Dyke Investment (GDI) platinum project is poised to become the second biggest platinum venture in Zimbabwe and a global game-changer as initial works show that the mine’s platinum group metals (PGMs) are among the most economical in the world.

Massive infrastructure development and job creation is now expected to ensue in Mashonaland West, as close to US$100 million has been injected so far into the Zimbabwe-Russia joint venture.

Mine construction has commenced and rapid progress has been made on the first box cut where excavations have revealed optimistic results from extensive drilling of about 130 000 metres.

Zimbabwe has the world’s second largest platinum reserves after South Africa, with Russia coming in a close third.

In an interview soon after touring the mine on Friday, GDI vice chairperson Mr Igor Higer said the project had set a fresh imprint on the global platinum industry owing to its unique resource.

“Only two other countries in the world, South Africa and Russia, can talk about the resources that we have at this mine,” said Mr Higer, adding, “The quality of the ore is high but what is also important to note is that economically, it is more viable to mine in Zimbabwe compared to South Africa or Russia.”

Mr Higer said the mines in Zimbabwe were not so deep compared to South Africa and Russia.

“If you are looking at it from a cost point, Zimbabwe is the future in terms of PGMs. If you are talking about quantity, yes, South Africa is on top, but expensive in terms of the mine condition as well as labour conditions, disruption of the mines and so forth.

“So if you put the context of the turbulence in pricing from our perspective, Zimbabwe is number one in terms of cost of production.”

Minister  Chitando noted that since the first box cut was established in February this year, significant progress had been made in designing the mine.

He said exports from GDI are expected to commence in 2022 to feed into Government’s grand plan for the US$12 billion mining industry by 2023.

“There has been very good progress and I want to look back at the visit by His Excellency (President Mnangagwa) to Moscow which marked commencement of works at GDI following the agreement he signed with his counterpart President Putin,” said Minister Chitando.

“Soon after that landmark meeting, the project went into finalisation of the project phase and in February we were here to witness the commencement of the first box cut. You can see the development towards mining activity expected to commence this year.

“From the brief we have as Government, there is going to be another box cut developed a few weeks from now. This is another significant development ahead of production of the first concentrate, which will be done in 2022.”

“Under the 2023 vision, platinum is earmarked to contribute US$3 billion annually. So in addition to mines that are already operating, we are going to have three new projects, including this one as well as the Karo Resources project in Ngezi.

“The output from this plant is about 300 000 ounces of 4E, which is going to make the mine the second largest after Zimplats.”

The mine has to date created 300 jobs with hundreds more locals expected to be employed this year as mine construction continues.

“Since the first box cut was opened in February, there has been a huge difference and a lot of work done. It adds up to the Provincial GDP (gross domestic product) as well as the national GDP.

“What is significant about GDI is they are not bringing staff from outside the country but employing locals and are paying attention to people from Mashonaland West.”

She said more jobs are set to be created.

“A lot of construction is going to take place in Mashonaland West. There is going to be a lot of development in infrastructure, building of houses and roads.”

GDI, which is a joint venture between Russia’s Vi Holding and Lindela Mining of Zimbabwe, is a high priority project in terms of economic and diplomatic ties between Harare and Moscow.

According to the project’s timelines, first mine production is expected to commence in early 2021 followed by concentrate production in 2022.

The company was granted exemption to continue operations during the Covid-19-induced lockdown after adopting the recommended precautionary measures.