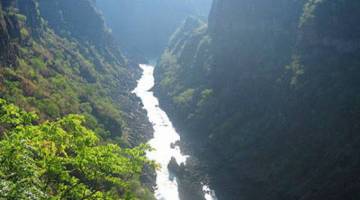 ZIMBABWE and Zambia have expressed satisfaction on the progress made in the construction of the Batoka Gorge Hydro-Electric Scheme (BGHES) since the project was awarded to a Chinese contractor.

The two parties’ Council of Ministers (COM) of the Zambezi River Authority, met last week for an extraordinary session to review progress in the implementation of the BGHES as well as to formally adopt the authority’s corporate strategy for the 2020-2024 period.

The meeting also considered and approved the 2020 supplementary budget for the Zambezi River Authority.

“The COM noted progress on the development of the Batoka Gorge Hydro-Electric Scheme following the award of the project development contract to the Consortium of Power Construction Corporation of China and General Electric,” read part of the communiqué by the authority signed by Zimbabwe’s Energy minister Zhemu Soda and his Zambian counterpart Mathew Nkhuwa released on September 16.

“The COM noted with satisfaction that engagements between the consortium, the authority and the power utilities had progressed well notwithstanding the disruptions of some activities that were caused by the outbreak and spread of the COVID-19.”

The 2 400 megawatt Batoka Gorge power plant, set to ease power challenges between the two countries, was mooted in 1992, but delayed until this year due to community resistance as well as colonial era debts.

The project is being funded to the tune of US$4,5 billion by General Electric and China Power.

The World Bank and African Development Bank have also expressed interest in funding the project.

“The COM considered and approved a supplementary budget for the period July to December for the Zambezi River Authority in the amount of US$403 999 in respect of employment and electricity costs for the period,” the communiqué further read.

“The COM formally adopted the corporate strategy for Zambezi River Authority that would guide the authority’s strategic direction for the period 2020-2024 and expressed confidence that the contents of the strategy will facilitate significant contribution by the authority to the socio-economic development of the two
countries.

The team also noted the change of land use from communal to urban of the north bank as proof that the land for the project was available and on title, a requisite in the provision of the project finance by the developer.

Submitted financial reports were also evaluated and project agreement refined to be entered into the developer for the development of the scheme.