Zimbabwe’s 89-year-old president Robert Mugabe has won another term in office amid the fury of the opposition, which alleges the election was stolen. Electoral officials have confirmed Mr Mugabe’s ZANU-PF party won more than two-thirds of all seats. But leader of the opposition MDC, Morgan Tsvangirai, is defiantly claiming victory and says he will challenge the result in court. 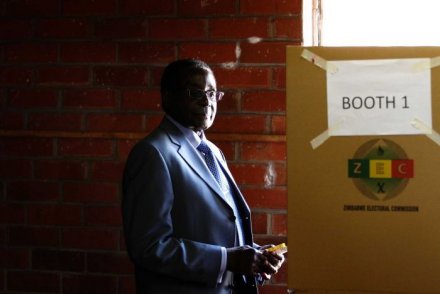 Zimbabwe’s 89-year-old president Robert Mugabe has won another term in office amid the fury of the opposition, which alleges the election was stolen.

It now gives the long-time president sweeping powers, including the right to change the newly-written constitution.

Leader of the opposition MDC, Morgan Tsvangirai, is defiantly claiming victory for his party in the parliamentary elections, despite results showing a landslide defeat.

Mr Tsvangirai says the election has been stolen and he will challenge the decision.

He says his party will present a dossier to the regional organisation that urged his party to work with Mr Mugabe to get to these elections.

“We don’t want a situation where the referee throws the whistle away and joins the other team,” he said. “That’s what we are seeing.”

They expressed relief that the elections had so far avoided the kind of violent turmoil that marred a vote in 2008, when 200 MDC supporters were killed by ZANU-PF supporters.

Mr Mugabe, who has ruled the former British colony in southern Africa since its independence in 1980, was formally proclaimed re-elected for a five-year term barely an hour after Mr Tsvangirai announced his planned legal challenge.

The US and European Union, which have imposed sanctions on Mr Mugabe over previous flawed elections and alleged abuses of power, say they are concerned over reports of irregularities in the July 31 poll.

Britain’s foreign secretary William Hague said he had “grave concerns” over the conduct of the vote and called for all allegations of electoral fraud to be thoroughly investigated.

“The irregularities in the lead up to the elections and on election day itself, reported by the observer missions and in contravention of SADC’s guidelines, call into serious question the credibility of the election,” he said.

Mr Hague expressed particular concern over evidence that the voters’ roll was not made available to all Zimbabwe’s political parties, describing it as a “critical flaw” in the election.

US secretary of state John Kerry said the election results were the culmination of a deeply flawed process and did not represent the will of citizens.

“In light of substantial electoral irregularities reported by domestic and regional observers, the United States does not believe that the results announced represent a credible expression of the will of the Zimbabwean people,” he said in a statement.

Mugabe was one of the guerrilla leaders who helped end white minority rule in the former Rhodesia, renamed Zimbabwe after a peace deal brought independence.

The southern African state has rich reserves of chromium, platinum, coal and diamonds.

Reaction from the West will be key to the future of Zimbabwe’s economy, which is still struggling with the aftermath of a decade-long slump and hyperinflation that ended in 2009 when the Zimbabwe dollar was scrapped.