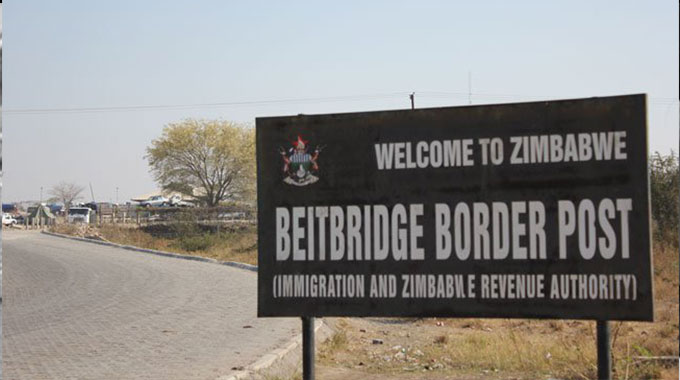 Thupeyo Muleya, Beitbridge Bureau
ZIMBABWE has tightened security to re-establish the integrity of its border with South Africa where cases of illegal migration had become rife at the peak of the Covid-19 induced lockdown which began in March where an average of 40 people have been intercepted daily.

When the country started implementing Covid-19 protocols, passenger traffic through the border was suspended, leaving only commercial cargo, returning residents, bodies for burial and diplomats on Government business with access to the land borders.

This then saw a number of people who fall out of these categories using illegal crossing points to enter and leave the country through the main border and the Limpopo River. To minimise the smuggling of the coronavirus across the border security was tightened to enforce compliance.

The Assistant Regional Immigration officer-in-charge of Beitbridge, Mr Nqobile Ncube said they were carrying out an enforcement and compliance operation at the border and its flanks. He said in the last two weeks they interpreted 262 border jumpers whom they have sent to the National Social Security (NSSA) Hotel, for quarantine.

On average the department is intercepting an average of 40 people for violating immigration laws along the border daily.

The hotel is being used by the Government as a transit point, quarantine and isolation centre for Zimbabweans returning from Eswatini, Lesotho and South Africa. Since the start of the lockdown 11 000 Zimbabwean arriving in the country through Beitbridge have passed through the NSSA hotel.

“Basically, what we have been trying to do for the past two weeks is to reinforce the integrity, and sterility of the border by ensuring that all the relevant process and protocols are adhered to. Our enforcement and compliance team has been on the ground every day focusing on all specific red zones that have been picked and our greatest worry now is the porous points along the Limpopo River. For now, we pray for a relief from above, because once it starts raining most of those illegal crossing points will be closed off. We will continue running those operations”.

He appealed to travellers and other agencies to cooperate with immigration compliance team to enhance order and efficiency under the Covid-19 environment. Mr Ncube said it was important that when the border re-opens on 1 December to passenger traffic, compliance and order be the key components to keep both the border workers and travellers safe from the pandemic.

He said they wanted to prevent touts, bogus customs and freight forwarders, and wheeler-dealers among other criminals from entering the port of entry.

“We look forward to enforcing more operations to make the border process seamless and free of touts, bogus customs agents who often dupe travellers or cause unnecessary congestion as they go about their activities” said the senior Immigration Officer.

Some of the known illegal crossing points near the main border post include the Spillway (500 metres east) Dulivhadzimu Gorge (3km west).

Among other criminal activities, human and child smuggling is common at Beitbridge during most peak periods like Easter holidays and the December festive season. In addition, the use of fake customs and immigration stamps by syndicates is a usual phenomenon during the same period and the Department of Immigration has smashed over six rackets in the last 18 months.

Minister of Home Affairs and Cultural Heritage, Hon Kazembe Kazembe said Zimbabwe was ready for the reopening of the Beitbridge Border Post and adequate resources were being put in place to ensure that there was smooth travelling as well as minimisation of possible transmission of Covid-19.

“Every December there is an influx of travellers and customs and immigration have always dealt with this situation. This time around there is Covid-19 and there is a need to capacitate the Health Ports. Our officials are seized with the matter to identify the requirements in terms of both human resources and equipment,” he said.

To enter the country a traveller must possess a negative Covid-19 test result, issued not more than 48 hours before the journey. If one does not have a negative test result, or if they exhibit Covid-19 like symptoms on arrival, they will be detained at a holding facility where they will be required to undergo testing. Travellers are supposed to use the public health systems and testing service to get a test in order to facilitate traveling to another country. Only travellers on foot or private cars will be allowed to pass through the border.