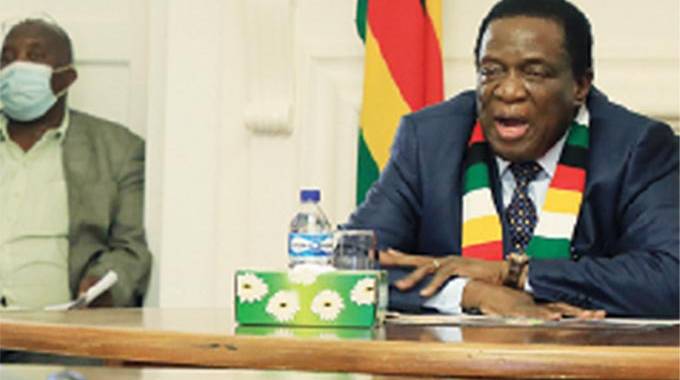 President Mnangagwa interacts with Chinese Ambassador to Zimbabwe Guo Shaochun at a virtual meeting at State House in Harare yesterday during the handover of personal protective equipment (PPE) donated by the Chinese government.

Herald Reporter
Zimbabweans are resisting cyber-attacks from detractors with an agenda of regime-change because they know there is no truth in the allegations of human rights violations and that they enjoy peace and stability, President Mnangagwa said yesterday.

Speaking after receiving a donation of personal protective equipment (PPE) from the Chinese government, which included tests kits, face masks, ventilators and oxygen generators, the President said: “Currently, Zimbabwe is suffering from cyber-attacks.

The social media attack is most unjustifiable, based upon fiction, non-facts, non-truth allegations, that there are gross human rights violations in the country. There is no evidence of such things happening,” he said.

“The arbitrary arrests, death, torture in the country, all that is being stated without evidence. We are enjoying peace and stability in the country but our detractors have decided to impose a cyber-war on our country in pursuit of a regime change agenda.

“We take comfort that this has been so in the last two decades and our people continue to be focused and support Government and we are consoled by the fact our friends, China are not being swayed by these detractors of Zimbabwe. We remain solid in supporting our position and we will continue to agitate for the removal of sanctions and against those who are peddling regime change agenda which is most unjustified.”

The donation was presented through a virtual meeting by Chinese Ambassador to Zimbabwe Guo Shaochun, who was at the Chinese Embassy, while the President, Health and Child Care Minister — Vice President Constantino Chiwenga — and the National Covid-19 Taskforce chairperson, Defence and War Veterans Affairs Minister Oppah Muchinguri-Kashiri, were at State House.

President Mnangagwa said despite all the challenges being faced, Zimbabweans remained determined to be independent and not interfere in internal affairs of other countries.

The close relations Zimbabwe enjoyed with China, Russia and India, had continued to pay off as they have supported the country during the difficult period of sanctions.

“We are in our 20th year of sanctions and, as a result, Zimbabwe has very limited options to receive support from the global financial windows which the rest of Third World countries are receiving to assist in the fight against Covid-19. We are left out and we have to fend for ourselves from our domestic resources.”

Zimbabwe and China are working on bringing back experts who have been stuck in China owing to Covid-19 to complete major projects such as the construction of the new Parliament building and the expansion of Robert Gabriel Mugabe International Airport and Hwange Power Station.

“There are several projects here in Zimbabwe, major projects, which have stalled in terms of progress as a result of the impact of Covid-19 where some experts, and in particular engineers, found themselves locked back home in China.

“I am happy that we have since found a way to bring them back to Zimbabwe to continue with the projects such as the (new) Parliament building which now is behind schedule as a result of the absence of experts, but continues to be worked on. And we have no doubt that when the experts come in, work will accelerate and possibly meet the target dates,” he said.

The President thanked China for continued support, especially in the fight against Covid-19.

In the last few weeks, there had been a spike in the spread of Covid-19 in Zimbabwe, with domestic transmissions on the rise, and he called on citizens to continue maintaining the measures to prevent the rapid spread of coronavirus.

Ambassador Guo commended the leadership of President Mnangagwa and the Government’s dedication in putting life first and, at the same time, making great efforts to revive the economy.

“Thanks to these efforts, we have seen positive signs. In the last 10 days, there was a record number of Covid-19 recoveries. Progress is also seen in Zimbabwe’s fiscal, monetary, trade and industrial performance. Meanwhile, we also recognise the challenges facing Zimbabwe in controlling Covid-19 and boosting the economy.

“I take this opportunity to reaffirm China’s commitment to working closely with Zimbabwe. We have been making good progress in this regard. Recently, the China-Zimbabwe traditional Chinese medicine and the acupuncture centre was established in China,” he said.

“In China, some Chinese traditional medicines were effective in the fight against Covid-19. I am looking forward for your support and the support from the Ministry of Health and Child Care,” he said.

Ambassador Guo said in the next few months, more Chinese engineers and technicians will arrive in Zimbabwe to push through works on the major projects being implemented.

He expressed concern over the publication of a story by a Zimbabwean privately owned newspaper that claimed the Chinese government was involved in Anjin’s business deals and conflicts in the country.

He said the claims by the paper were false. China opposes any illegal sanctions imposed on Zimbabwe, and called for their “immediate removal”.

Allow us to move on from the land issue