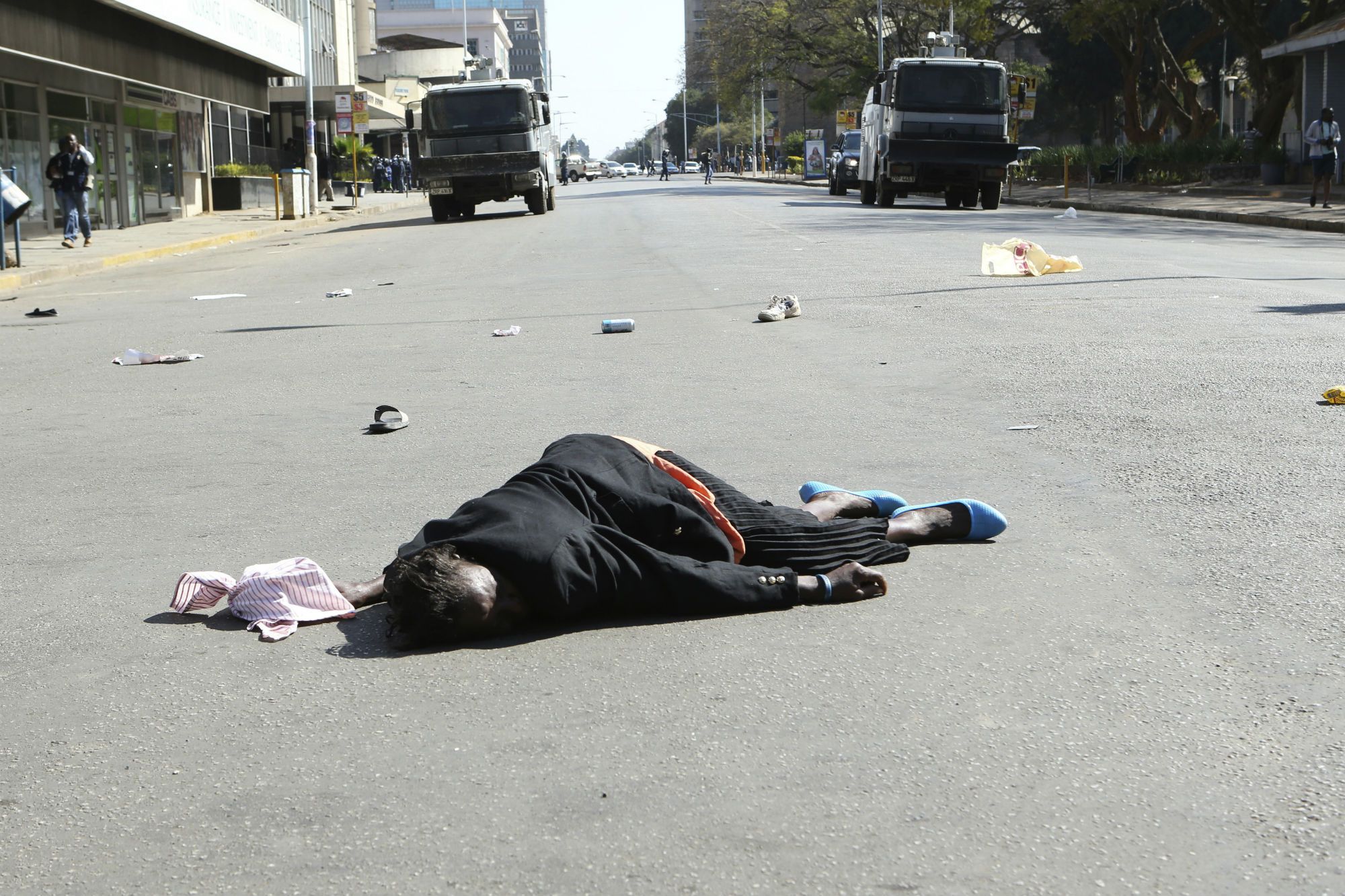 A woman lies injured on the tarmac after been injured during protests in Harare.AP

Seven people were injured, including one in critical condition and 80 people were arrested, said Nelson Chamisa, leader of the Movement for Democratic Change opposition party that organized the demonstrations.

“There is not going to be any rest until we achieve a people’s government…we will continue to mobilize,” said Chamisa at a press conference, following a day of clashes between police and opposition demonstrators.

A few hundred demonstrators gathered in Africa Unity Square in central Harare, despite a police ban on the protest that was upheld by Zimbabwe’s High Court.

Police fired tear gas which engulfed the square to disperse the protesters, who ran into nearby streets. Police used batons to beat several people. One woman collapsed on the street after being beaten. She and others received emergency treatment and were taken to hospitals by Red Cross ambulances.

“Don’t weep for me if I die. I chose to die for Zimbabwe,” sang some protesters, in the Shona language, before running away from clouds of tear gas.

Sitting on a sidewalk in the city center with a swollen leg he said was from a beating he received from the police, Tafara Chiringa criticized the government.

“We came in peace today, just like we did in 2017 (in demonstrations to oust former President Robert Mugabe) but look at what they have done to us,” said Chiringa. “It’s as if Mugabe is back.”

The clashes came after Zimbabwe’s High Court upheld the police ban on the opposition protest. The court early Friday rejected the appeal from the opposition party to declare the planned protest to be legal.

Although a few hundred protesters gathered, many more Harare residents stayed off the streets and shops did not open to avoid any possible trouble.

The opposition party had planned what it said would be a peaceful protest to press President Emmerson Mnangagwa to set up a transitional authority to address economic problems and organize credible elections. The protests will spread to other cities next week, the opposition said.

Zimbabwe’s economic turmoil with inflation at 175 percent, widespread power cuts lasting up to 19 hours a day and shortages of water are blamed for the rising political tensions.

From the hope that swept across the country with the forced resignation of repressive ruler Robert Mugabe in November 2017, the nation has returned to widespread resentment and fear, according to government critics and residents.

Six anti-government activists were abducted and tortured this week ahead of the protests, according to human rights groups.

Zimbabwe’s president urged the opposition to engage in dialogue, but at the same time his government pushed parliament to quickly adopt new security legislation criticized as repressive.

To discourage the protests teams of police officers searched vehicles at checkpoints on roads leading into the city. Police warned people to stay away from the demonstrations.

“Do not take part, you will rot in jail,” shouted police officers through megaphones on Thursday in downtown Harare and some residential areas.

The Harare protest highlights the challenges that confront Mnangagwa, 77, who came to power with promises of sweeping political and economic reforms. But now his government is widely viewed as an extension of Mugabe’s economic mismanagement and even more heavy-handed on security, according to human rights groups.

In addition to the debilitating shortages of power and water, about a third of Zimbabwe’s 15 million people are in dire need of food aid, according to aid agencies.

Amnesty International accused Mnangagwa’s administration of “using some of the brutal tactics seen under the government of Robert Mugabe,” said Muleya Mwananyanda, Amnesty International’s deputy regional director for southern Africa. “Instead of listening to protestors’ concerns about the economy, the authorities have used torture and abduction to crush dissent and instill fear.”

The Zimbabwe government should allow peaceful protests, said Rupert Colville, the spokesman for the UN High Commissioner for Human Rights.

“With opposition demonstrations still likely to take place in Zimbabwe in the near future, we urge the government to find ways to continuously engage with the population about their legitimate grievances on the economic situation and to stop cracking down on peaceful protesters,” said Colville, in a statement Friday.

“We are deeply concerned by the socio-economic crisis that continues to unfold in Zimbabwe,” he said. “The dire economic situation is now impacting negatively on the realization of the economic and social rights of millions of Zimbabweans.”