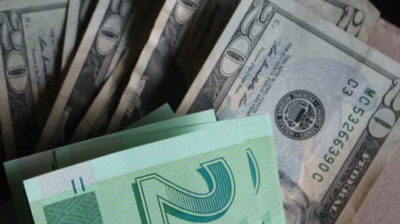 THE interbank market entered the 14th week of trading this week and results from the auction show that the Zimbabwean dollar (Zimdollar) firmed by 0,27% against the US dollar in the week under review.

The local currency has firmed against the US dollar over the latest four trading weeks. Over the four-week period, the Zimdollar has gained 2,34%, which is commendable given the background of a 10-week loss. In the first 10 weeks, the Zimdollar lost -32,4% before recovery over the remaining four weeks to date. The evolving performance and near trend reversal is an indication of stabilising currency from a technical viewpoint.

Typically, the market driven rate comes in-between the two. A wider variance between the two rates therefore shows that the market has wide varying views and estimates of the possible value of the local unit, while the opposite is true. These collective technical indicators, added to the fundamental aspects of liquidity demand and supply as well as underlying forces such as broad and base money supply help shape a more informed narrative on the exchange rate.

In the week under review, the overall demand levels shot up significantly and this is both positive and negative as we will show here. At US$30 million, the amount demanded and allotted was the highest so far since June. It was 49% above prior week and 98% higher than the 13-week average of US$16 million.

On the positive side this statistic shows a market that can readily absorb high levels of demand. In other words, the statement is that the supply side is intact and can stretch as far up as demand asks for. It is a confidence boosting statistic that could psychologically influence economic players to be more confident of the local currency. Again on the positive side, it demonstrates a possible ticking industry. Broad aggregate demand levels have been impacted by Covid-19 and for most of the period since April, industry has largely scaled down.

With disruptions in supply chain, inter-nation trade had sharply declined.

A relaxation of lockdowns has now seen industry restoring production in many economies including Zimbabwe and this could be informing the increasing demand for forex. All else being equal, the picking up of demand is an economic positive which in the long run should help stabilise the currency.

On the downside, the increasing demand may reflect growing underlying local currency liquidity supply. The only two possible ways demand for forex could increase is through a monetary injection by the central bank or increasing trade prompting higher local production through importation of raw materials.

While money supply numbers at base level show yet another stable performance, it is equally a possibility that RBZ would disproportionately churn out local currency and prompt a spike in USD demand. This would be a worrying phenomenon given that the current levels of demand surpass the market averages and cannot be sustainably satisfied, if exports levels are stable.

Our broad views are that the exchange rate performance has been very encouraging over the last one-month period. We are, however, still concerned about the underlying drivers, which to date have not been as clear. RBZ says supply has largely come from exporters (60-70%) and the difference from the bank.

Assuming this statistic is true, USD supply levels would be sustainable given the average import demand level. However, if most of the liquidity is coming from the bank through borrowed facilities, supply levels cannot be sustained.

A strong productive base, supported by a balanced fiscus, is the fundamental driver of a stable exchange rate. Production has so far been falling year-on-year and this has negatively weighed on the local currency. A bit of cushion has been provided by a positive budgetary balance, but that too has shown significant weakness in real terms.

Much of the benefit on the fiscal side is due to cost suppression and not revenue growth. We are, therefore, of the view that it is still too early to be bullish on the local currency and advise that businesses should be cautiously optimistic as they navigate the current crisis.

The post Zimdollar moving towards stability? appeared first on The Zimbabwe Independent.