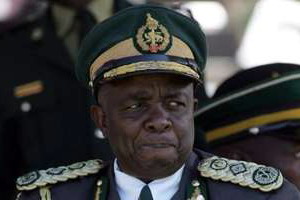 HARARE – Zimbabwe Prisons and Correctional Services (ZPCS) Commissioner-General Paradzai Zimondi (pictured) talks to the Daily News on Sunday’s Tendayi Madhomu about the state of the correctional facilities in Zimbabwe.

Below are excerpts of the interview.

Q: Please, may you shed some light on the Prisoners Exchange Programme deal signed between Zimbabwe and China.
A: This was done at a higher level, we are just operators here. We have regional prisoners exchange programmes with countries like Mozambique and Zambia; these are already underway. But with the Chinese exchange programme it takes the ministers of Justice for the two countries to come up with legislation that will facilitate the exchange of prisoners from Zimbabwe to China, or vice versa

Q: How many Zimbabwean prisoners are there in China, and how many Chinese nationals are serving in the local prisons?
A: We have no Chinese in our prisons. I was in China last week; they told us they have 12 Zimbabwean prisoners; 11 women and one man. All of them are drug-related offenders, that’s what they told me.

Q: What was the thrust of your visit to China?
A: It was a study tour, the aim was to study and learn.  It was a visit meant to exchange and learn from their prisons. This was not my first visit of this nature; I have also been to England and Denmark.

Q: What plans are underway to rehabilitate the country’s prisons?
A: Before we even look at prisons, the country’s infrastructure is in a bad shape, it needs to be fixed. Prisons often come at the end of the tail; we are talking about criminals who have wronged the society, how do they become a priority? Our prisons need to be resuscitated but there are no resources at the moment.
Most of them are very old; we do have modern prisons, however, at Mutimurefu, Khami, Kadoma and Mutare.
These are much better than those that were built before independence. It would be a waste of money to rehabilitate those that have become too old. The best solution would be to relocate, for example Harare Prison which is in the CBD; it will only become an eyesore.

Q: Your aim is to rehabilitate the inmates, how will this be achieved in deplorable prisons?
A: Indeed, we aim at rehabilitating but the issue is a lack of resources, if we had enough resources, it would be better. We do have open prisons at Kwekwe, Connemara, where prisoners who have been on good behaviour and are left with two years of serving are transferred to.
At these prisons, we impart skills like building, carpentry, that some of our staff members have specialised in. We also have a vocational centre at Kaguvi.

Q:  There have been reports of food shortages and overcrowding at local prisons, how has this been addressed?
A: There is no overcrowding in our prisons; it is only at remand prisons where there is a lot of pressure. Our holding capacity is 17 000 and at the moment we are below that. We have a lot of farms, if we had enough equipment and resources, there could be no food shortages.
We want the inmates to work for their food, to feed themselves. At the moment, they are feeding on taxpayers’ money and that is not ideal. We still have three meals a day, though they may not be nutritional, sometimes there is not even cooking oil. We are failing to meet the required dietary standards as prescribed. The budget is not enough for important sectors like education and health; that only tells you where this sector is left.

Q: In the previous winter seasons, some inmates, especially before the courts, have complained that they neither have jerseys nor blankets. Has this been addressed?
A: I have not heard of prisoners who have frozen to death in our cells. It all goes back to the budget. Yes, we have problems with bedding, winter clothing and sometimes we get assistance from their relatives.

Q: Sodomy has been rife in prisons, how have these cases been handled?
A: It is treated like rape, and if reported, cases have been taken to the courts, unless if there is consent. Sodomy is not allowed according to our laws; it is still the same inside prison.

Q: What are your sentiments towards according prisoners conjugal rights? Have the prisoners not been deprived of a fundamental need?
A: It’s not even in the Constitution; if the law said so we would consider it. As for now, we are not even thinking about it. We have been talking about overcrowding in our prisons, how would this even materialise. Maybe in the women’s section; where the inmates have not gone beyond the 500 mark. Ours is just to rehabilitate them.

Q: How have family visits helped in the rehabilitation of inmates?
A: In China, we learnt quite a lot about the benefits of family visits. The family visit day helps a lot. In countries like China where there are better facilities, families are given some quality time with the inmates in a home setup.
They have an opportunity to sit together and share a meal that the inmate has prepared. Back here, there are fewer visitors on the women’s section compared to the men, I don’t know why.
Family visits are very important to those in prison. If they don’t get visitors, it affects them, psychologically.
The family visit day is held once a year, although there are recommendations for it to be held twice. But whenever someone wants to visit an inmate, we have never said no.
Visitors are also allowed on public holidays like Christmas, New Year, and Heroes’ day.
We have nothing to hide in our prisons, we are open, and whatever happens inside should be known out there.

Q: Have there been reports of cholera in the local prisons?
A: So far we have no cases of cholera. We are trying to maintain hygienic conditions in our prisons, as a preventive measure against the disease.