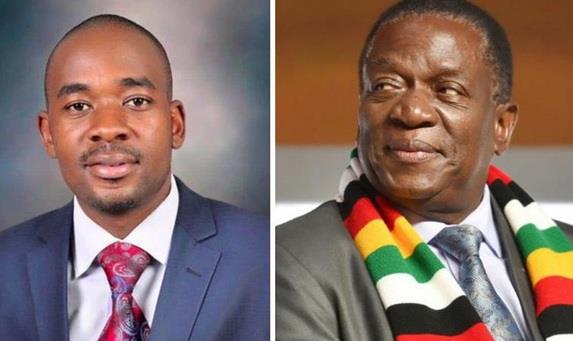 HARARE – There was always going to be a disputed winner of Zimbabwe’s 2018 elections, especially after Robert Mugabe was no longer on the presidential ballot paper.

And it was always going to be very personal. In a number of ways. Firstly, it was the personalities that were running for office that mattered to the electorate.

For the ruling party supporters, it was about ensuring that their candidate, no matter his flaws pipped it. Even if barely.

For opposition supporters it was anyone but a Zanu PF candidate and the one with the best possible chance of defeating the ruling party. (There were a very few neutrals in this one).

Because of this, this was not an election about “issues”.  It didn’t need to be. After almost four decades of Zanu PF rule, it became personal also to the opposition voter.

They just wanted to see someone new.

So the ruling party also decides to make it personal. And argue that they would give their candidate a chance, no matter his flaws.

A development that warranted a brief but evidently disappointed response from the ruling party candidate. And that will also be talked about in ruling party, opposition circles as well as in the mainstream media for a bit of a while yet.

However, not also forgetting the ordinary urban and rural voter who also took it personally. For the former, mainly in painful remembrance of the urban economic collapse, especially of the mid 2000s.

For the latter, it would be in remembrance of both political violence but also in consideration of material gains as well as being more politically cautious and therefore conservative as a result of a consciousness that hasn’t forgotten the import of political violence. And its aftermath. (An issue that is more structural/historical than just electoral.)

Add social media into the political/electoral mix and emotions not only get higher but become exceedingly personal. But also potentially ephemeral. All making for our elections becoming a national moment of “political catharsis” or an “in the moment” anger motivated political experience.

A moment which is not helped by the fact that in the immediate post election period there is needless loss of life after demonstrations in Harare’s central business district.  Emotions, grief, suspicions and search of immediate justice solutions become even more palpable.

This is why it remains of the utmost national importance that emotions (one sided anger/sadness/snide joy/partisan celebration) are reigned in by political and other societal leaders. This, as advised by the regional and international observer missions, that all legal recourse, cases and those responsible for violence and at least six tragic deaths in Harare are brought to justice.

What is, however, clear is that in the aftermath of the (still) official Zimbabwe Electoral Commission (Zec) local council, parliamentary and more disputed presidential results it is imperative for those that would lead us to reflect deeply on what, in these elections, they all along saw as an opportunity.

An opportunity in which to bring back Zimbabwe to what they sometimes referred to as “normalcy”.

That opportunity, even in the aftermath of the election is there. And its still up to those in political leadership at all levels to seize it.

While I may not be in any advisory role to political leaders, their parties or their supporters, I am personally persuaded that those in such positions can and will do better.

That is to help their leaders or those that they are working with to understand the significance of a post-Mugabe and possibly post-autocratic State.

That is, the need to consolidate the national consciousness into seeing and thinking beyond the moment and explaining that where they are committed to people-centred democratic and social economic justice values, “history” will or would absolve them.

Even in the aftermath of the now pending constitutional court challenge and its highly anticipated ruling on the presidential vote count.

All the while keeping in their “democratic and posterity” minds that the legal fact of “harmonised” elections may not be as democratic as envisioned by the parties that authored the Constitution in 2013.