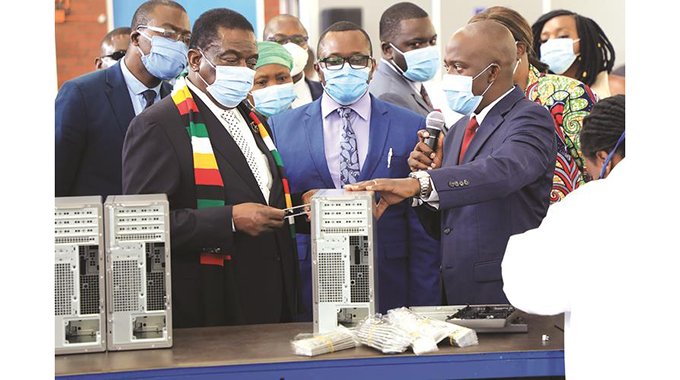 With the ICT assembly plant of the Zimbabwe Information Technology Company (Zitco) commissioned yesterday, and the National Data Centre and High Performance Computer Centre already open, all the pieces are now in place for the public sector to develop on-line digital services and move from manual to automated systems, President Mnangagwa said yesterday.

At the assembly plant commissioning, the President said that ministries and departments now had to set the timelines for migration to automated systems, including putting in place the needed ICT staff, since the public sector could no longer be the follower of technological change and playing catch-up all the time.

Zitco in Harare is the first assembly plant for ICT equipment in Zimbabwe. It is a joint venture between TelOne, Chinese company Inspur and a Government-owned entity Flushcord Enterprises. It is assembling desktop computers, laptops, tablets, prepaid electricity meters, smart water meters and other ICT-orientated equipment. This is common practice around the global ICT industry with many companies using a small range of standard common components.

“Government ministries, departments and agencies are directed to set timelines for the migration from manual to automated systems. Equally important is the need for all public entities to ensure that their staff establishments provide for ICT and tech savvy persons. The situation where Government entities are playing catch-up with the ever changing technologies cannot continue.”

Ministries and departments should develop online digital services through the exploitation of existing linkages between the National Data Centre, the High Performance Computer Centre and other connectivity networks in which Government has invested.

There was however, need to balance the benefits derived from the ICTs and the risks associated with their use.

The launch of the assembly plant, President Mnangagwa said, was in sync with Government’s thrust of innovation, science and technology development and was proof that ICT devices could be manufactured locally.

“The facility will further help to promote technology transfer, foster human capital development, enhance import substitution and provide robust platforms upon which innovation and design can be commercialised.”

The President said while Zimbabwe had been under illegal sanctions for the past 20 year the embargo should not distract the country’s development efforts.

He said the manufacture of ICT hardware locally should also trigger development of software packages riding on the abundant intellectual capacity in the country.

“The innovation hubs and industrial parks at institutions of higher learning are therefore encouraged to speedily develop appropriate solutions and applications towards the growth of big data economy in tandem with the expectations of the fourth Industrial Revolution,” President Mnangagwa said.

Products manufactured at the plant will enable the modernisation and automation of Government systems to propel the national development priorities outlined in the National Development Strategy 1.

Speaking at the same occasion, Minister of ICT, Postal and Courier Services Dr Jenfan Muswere said the opening of the assembly plant was part of efforts to revive the TelOne manufacturing factory which had been lying idle owing to changes in technology.

“This assembly plant has advanced our resuscitation efforts through which we are pursuing other ventures like smart phone assembly, renewable energy manufacturing and electronic waste management among others,” he said. Chinese ambassador to Zimbabwe, Mr Guo Shaochun said the opening of the plant was another step by Zimbabwe to modernise its economy. “As your friend we commend Your Excellency’s leadership and your Government and we commend the bravery and resilience of Zimbabwe’s people,” Ambassador Guo said. China would continue assisting Zimbabwe in various fields.

TelOne managing director Mrs Chipo Mtasa said the assembly plant had already started operating with the first run of 2 500 desktop computers and laptops having already been made.

“It is expected that after the commissioning, Zitco will now be moving towards full production where a production capacity of at least 50 000 and up to 150 000 ICT units can be achieved annually. This production level will be supported by a staff complement of about 100 in-house with at least 300 jobs expected to be created in both upstream and downstream industries.”