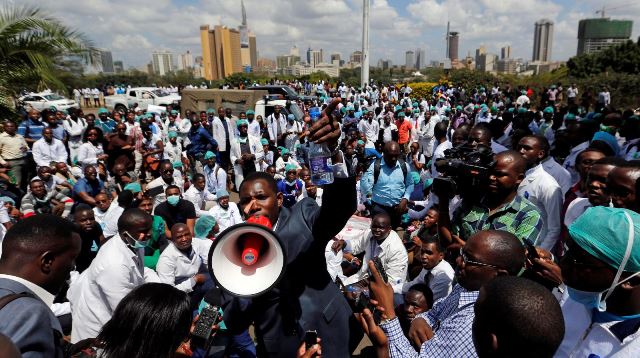 HARARE – The crisis at the country’s public hospitals is worsening, after nurses said yesterday that they would start reporting for duty for three days a week due to Zimbabwe’s biting fuel shortages, as well as their outstanding working conditions demands.

This comes as doctors continued with their strike yesterday despite claims by the government that they had called off the devastating industrial action.

Zimbabwe Nurses Association secretary-general, Enock Dongo, told the Daily News that they had “agreed” with Health minister Obadiah Moyo to cut their working days due to the country’s fuel problems.

“We agreed with the minister that nurses should come to work for three days per week, as we are still negotiating with the government to address our concerns.

“The government told us that health institutions must remain functional, while we are negotiating.

“The four days off will work as a temporary solution as our nurses are struggling to come to work due to transport challenges.

“All civil servants are going to have a meeting with the government on Thursday,” Dongo said.

Nurses are demanding salaries in United States dollars, although the government has told them that it has no capacity to pay them in greenbacks.

“On Monday, we told our minister that our members are suffering due to the current economic crisis, as our salaries have been eroded. The response from the minister was that government has no capacity to pay us in US dollars.

“We also registered our displeasure on the fact that we are not happy with the issue of bonuses. Our bonuses should include allowances,” he said.

Meanwhile, doctors yesterday continued with their strike which has already crippled operations at most public hospitals.

As a result, these hospitals have shut their doors to outpatients and also discharged stable patients as the doctors’ strike has got into full swing. They are attending to emergency cases only.

“We wish to set the record straight that the industrial action that started on the 1st of December 2018 is still on-going and the healthcare crisis in the country has reached a critical level,” the Zimbabwe Hospital Doctors Association (ZHDA) said yesterday.

ZHDA secretary-general, Mthabisi Anele Bhebhe, also told the Daily News that they were “greatly disturbed” to learn that Moyo had gone on national television to misinform the nation that the on-going industrial action had been called off.

Bhebhe also said Patrick Mugoni, who spoke on television purporting to be their secretary-general, had been dismissed and Moyo was aware that he no longer represented doctors’ interests.

“We wish to inform all relevant authorities, key stakeholders, members of the press and public that the individuals by the name … Tsopo A and … Mugoni P no longer represent doctors on any business,” Bhebhe said.

The striking doctors are protesting the severe shortages of pharmaceutical drugs at public hospitals — as well as the selling of available drugs in foreign currency by retail pharmacies, the poor state of the country’s hospital infrastructure and their “falling” salaries which they now want the government to pay in foreign currency.

Zimbabwe’s health delivery system has for a while now been battling myriad problems, as a result of the country’s worsening economic climate.

In the past, major referral hospitals have had to suspend many services as a result of shortages of drugs, including painkillers.

At the peak of its economy, Zimbabwe made minimal imports of essential drugs due to the then healthy state of the local pharmaceutical industry which was dominated by CAPS Holdings.

But CAPS has been teetering on the brink of total collapse after it experienced serious financial problems about five years ago.