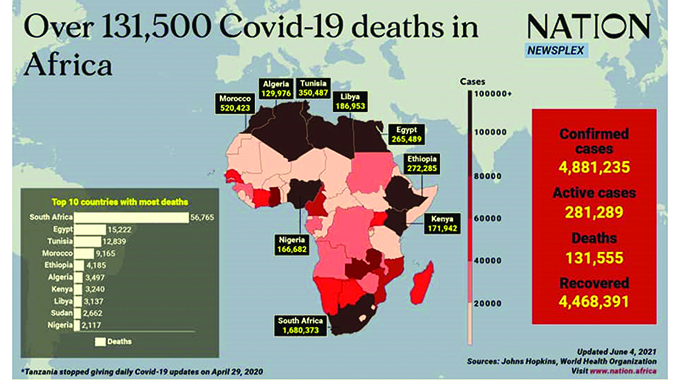 Zimbabwe’s quick and decisive response to the Covid-19 pandemic has seen the country among the 20 African nations that have the least number of deaths since the outbreak of the disease.

Zimbabwe’s death toll is only 1,2 percent on the continent.

According to the latest statistics from the John Hopkins University and the World Health Organisation there are 10 African countries that have recorded more than 2 000 deaths.

With 1 605 deaths, from over 39 168 cases, Zimbabwe is among African nations that have not been ravaged by the disease. Following the outbreak of the disease last year Zimbabwe instituted various measures to stem the spread of the disease.

A total lockdown in March last year was the first step in easing the spread of the virus.

Numbers of people at gatherings that include church, weddings, funerals and sporting events have been restricted while musical concerts have been prohibited since last year.

Government also made wearing of face masks and hand sanitising mandatory when in a public place or entering any public building. With the coming in of vaccines Zimbabwe was among the first country to introduce mass vaccination of its citizens and over one million jabs have now been given.

President Mnangagwa has since assured the nation that Government would procure regular supplies of vaccines to maintain the programme and ensure that it meets its target of inoculating at least 10 million people to achieve herd immunity.