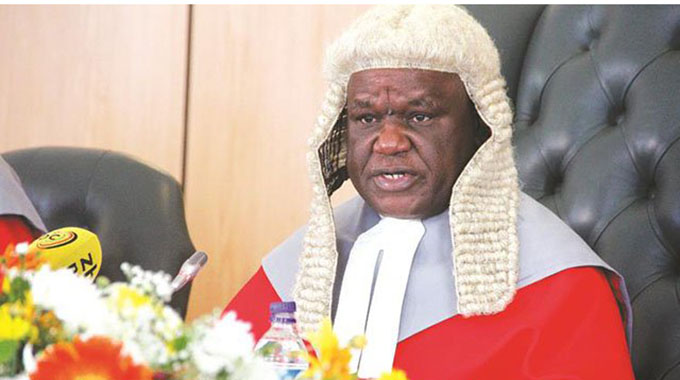 The contest over the extension of Chief Justice Luke Malaba’s service by another five years yesterday reached the Supreme Court with Justice, Legal and Parliamentary Affairs Minister Ziyambi Ziyambi and Attorney General Advocate Prince Machaya separately filing their notices of appeal against an urgent High Court judgment made on Saturday.

Both Minister Ziyambi and the AG are challenging the High Court decision on Saturday to annul the extension of Justice Malaba’s service beyond the age of 70 on the grounds that the recent Constitutional Amendment allowing judges, including the Chief Justice, the option of serving to 75 could not include sitting judges of the Constitutional and Supreme Courts but did include sitting judges of the High Court.

Justices Happias Zhou, Edith Mushore and Justice Jester Charewa on Saturday blocked the Government move to extend Justice Malaba’s tenure by five years as allowed by Constitutional Amendment Act Number 2. In terms of that Act the retirement age for all judges is now 70 but every judge has the option to serve to the age of 75 so long as they are mentally and physically fit to do so and exercise that option before their 70th birthday.

This the Chief Justice did and with his medical certificate has his term extended.

The three High Court judges ruled that the Chief Justice ceased to be the Chief Justice upon reaching 70 years on Saturday and that the option of an extension of service did not apply to incumbent judges of the Constitutional Court and the Supreme Court.

However, Minister Ziyambi and Adv Machaya want the judgment of the High Court set aside.

Minister Ziyambi in his grounds of appeal explained the errors made by the High Court judges in their ruling, which prompted the appeal.

It is Minister Ziyambi’s argument that the High Court erred in finding that the Human Rights NGO Forum executive director Musa Kika had legal basis to obtain the relief that it granted him in the absence of evidence of the violation or potential violation of its members’ right to equal protection and benefit of the law in terms of section 56 (1) of the Constitution of Zimbabwe.

He also argues that the lower court erred in granting the application without having made a declaration that in fact the right of Kika in terms of section 56 (1) of the Constitution of Zimbabwe had been violated.

Minister Ziyambi also attacked the lower court’s reasoning when the constitutionality of Constitutional Amendment No. 2 not having been in question and the High Court having recognised it as a valid law, went on to make a wrong finding that section 186 (4) as amended could not derogate from the provisions of section 328 (7) of the Constitution of Zimbabwe and, therefore, Justice Malaba had ceased to be the Chief Justice of Zimbabwe upon attaining the age of 70.

“The High Court consequently erred in failing to find that the appointment of the 2nd Respondent as the Chief Justice of Zimbabwe to continue in office made by the President of Republic of Zimbabwe on 11 May 2021 was with legal effect from the 16th of May 2021.”

It is also Minister Ziyambi’s contention that the court erred in finding that the current Judges of the Supreme Court, and the Constitutional Court were not entitled to benefit from the new option while at the same time finding that the extension of tenure of judicial service was allowed for High Court Judges.

The Court ought to have found that section 186 did not extend any term limit for Chief Justice Malaba and the Judges of the Supreme and Constitutional Courts.

The AG also filed a similar notice of appeal as they are both seeking the same relief.

Chief Justice Malaba attained the age of 70 on Saturday but as the now amended section of the Constitution allows, he exercised his option before his birthday to continue until 75 and submitted the required medical certificate that he was in good mental and physical health.

The Judicial Service Commission has since announced that Deputy Chief Justice Elizabeth Gwaunza is now the acting Chief Justice, pending the outcome of the appeal.