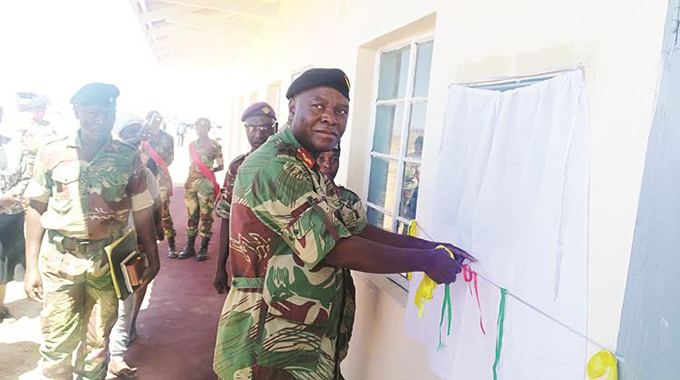 Midlands Bureau
The Zimbabwe National Army handed over a state-of-the-art Munikwa Clinic to the Shurugwi community at the weekend after completing the project that was done as part of the Zimbabwe Defence Forces community assistance programmes.

The clinic has a consultation room, a male and a female ward, a maternity wing, a pharmacy, a dental wing and is solar-powered.

“We are here to fulfil our constitutional mandate,” he said.

“In times of peace we are expected to assist communities in their development. We are pleased to be part of these projects which are set to change the people’s lives for the better.”

Brig-Gen Maseko said ZNA was a people’s army and had the duty to execute developmental projects in communities.

“It’s a project which has been going on over the last 10 months.”

Chief Nhema commended the ZNA and Tongogara Rural District Council for the project, saying it was a relief to the local people who used to travel more than 10km to access medical help.

Newer Post
Crisis Coalition statement on the SADC Communique of the 40th Ordinary Summit of Heads of State and Government
Older Post
Will SADC leaders speak on Zimbabwe as virtual summit gets under way?