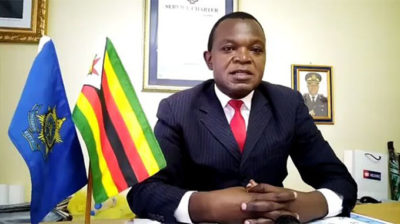 POLICE have launched a manhunt for a woman who is seen in a video bashing her infant daughter following a marital dispute.

In a tweet last night, national police spokesperson Assistant Commissioner Paul Nyathi said they were appealing for information which would lead to the location and identification of the abusive woman.

The three-minute-10-second video has since gone viral on social media platforms.

“The ZRP is appealing for information which can lead to the location and identification of a woman who is seen in the video assaulting her child apparently as a revenge act for a marital dispute with the father of the child,” Nyathi said.

https://t.co/kdj5zVFU99
The ZRP is appealing for information which can lead to the location & identification of this woman who is seen in this attached video assaulting her child apparently as a revenge act for a marital dispute with the father of the child.

“The woman is even claiming that she will die together with the child.”

In the video, the child, seated on a bed is defencelessly attacked by the hysterical mother.

“I stayed in the hospital without anyone paying for my rentals, there was no one to pay for my saloon rentals, now that your father has decided to dump me, he is talking nonsense about my life. If he no longer affords the upkeep, let him say it out. If he can’t let me just kill you, after killing you, I will then kill myself so that he will not have problems in his life,” she said.

The lady said she was in pain.

“I am suffering in this house, I am sick and those people who come to visit me, my relatives from my roots, they have been accused of dating me, there is no one willing to pay me a visit now,” she said.

“I stayed with your father’s relatives and no one helped me, they would feed on the food that I bought using my money, I suffered working to look after them and on top of that they don’t appreciate my efforts.”

She added: “They go around badmouthing me, what wrong have I really done to them; your father has broken my heart, it better for me to die, I will die along with you, I will not leave you alone, I will keep on abusing you, I will beat you until I satisfy my heart, I am tired of being abused by the Kanyuchi family, I am tired.”