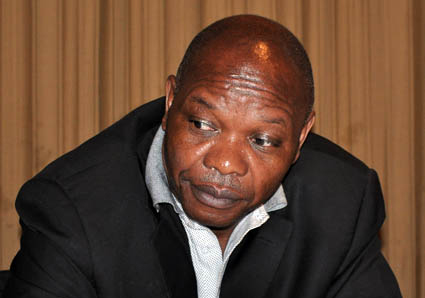 HARARE – Business came to a standstill at a Harare hotel yesterday after Zimbabwe Tourism Authority (ZTA) chief executive officer Karikoga Kaseke was told that a less-than-400ml glass of orange juice had outrageously spiked to $10.

The Daily News crew was at the hotel conducting other business when Kaseke had a run-in with hotel staff and was subsequently offered the glass of the same juice for $5 because of his “status.”

Kaseke declined the offer demanding to see the general manager who arrived at the scene only to insist “sir, the price is $10, it’s freshly squeezed juice.”

Kaseke fumed that the skyrocketing prices at hotels were costing tourism in a big way.

“We are not doing ourselves any favours,” Kaseke said.

“We are going all out to invite tourists to come to Zimbabwe but no tourist will stand for this. In South Africa you can have a full breakfast with 120 rand. This is not acceptable. It’s just driving away tourists,” he fumed.

“They tell me the small glass of juice is $10 because it’s freshly squeezed juice. So, what? What component of the Zimbabwe produced orange has gone up? It’s just outrageous.”

Kaseke was particularly incensed that hotel staffers had attempted to pull wool over his eyes by offering him the juice at half the price.

“The food and beverages manager called his boss to say ‘its five dollars for you’ but it’s not about me. It’s about the whole country.”

The tourism chief said he would engage industry players to find a lasting solution.

“I don’t want to give the impression that we are controlling prices but if we allow things to go on like this where are we going? It’s unreasonable for any hotel to charge $10 for this small glass, just because it’s freshly squeezed. It’s not fair. We think we are punishing government but we are punishing ourselves,” he said.

The hotel’s communications department later told the Daily News in statement that “there was a small misunderstanding on the size of the glass but everything has been cleared out now.”

This comes as Zimbabwe’s upmarket hotels have increased prices across board with double bed rooms now costing anything in the region of $120 to $200.