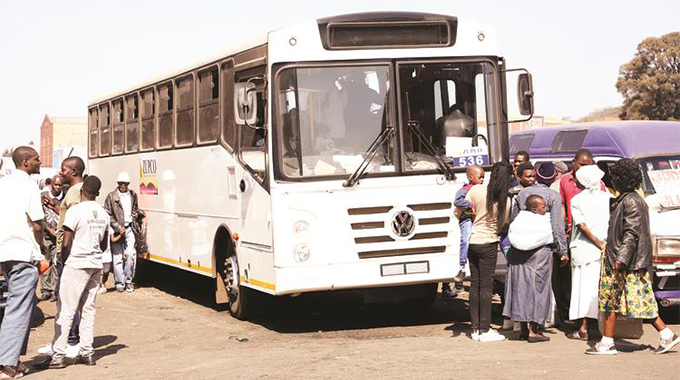 Announcing the developments at a post-Cabinet Press briefing yesterday, Information, Publicity and Broadcasting Services Minister Monica Mutsvangwa said the increase in carrying capacity was subject to mandatory temperature testing, wearing of masks by passengers and the buses being disinfected and sanitised after every trip.

Transport challenges have been growing as the formal economy joins essential services in being exempted from the lockdown now at Level 2.

With companies in the formal sector now all allowed to open, a lot more people need to get to and from work.

This has seen workers spending long periods queuing at bus stops to get to work, or take a change in a pirate service, and long queues forming at city centre and industrial bus terminuses.

Independent kombis, which were the backbone of public transport, remain banned, although kombi and bus owners can apply to join the Zupco fleet under the already existing franchise arrangement.

Public transport challenges have been worsened by the necessary social distancing rules, which effectively halved the number of passengers in a bus or kombi. Recently, Minister Mutsvangwa announced that the Zupco fleet (of buses and kombis) had been boosted by between 300 and 800 to meet the growing demand for  transport.

Though acknowledging the crucial role truckers play in ferrying cargo across borders and cities, Minister Mutsvangwa said it was worrisome that most of them were testing positive for Covid-19, yet they have become responsible for the unlawful movement of citizens between cities and in cities, disregarding lockdown  restrictions.

Cabinet, the minister revealed, resolved that truck drivers found transporting passengers without authorisation be penalised, as they were putting passengers and many others at risk.

Minister Mutsvangwa said it was further agreed that truckers should be enlightened on “regulations governing their operations in Zimbabwe at the borders and that further guidelines for the mandatory testing of truck drivers would be availed soon.”