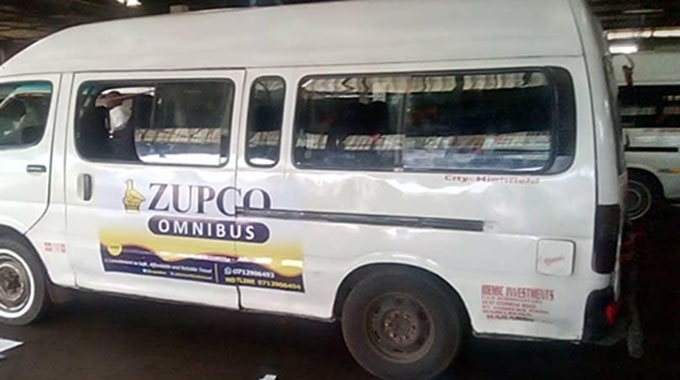 Zupco kombis come at a time when the transport utility is being revived by Government as part of measures to build a safe and reliable transport system in the country.

President Mnangagwa recently said Government was working tirelessly to fulfil its promise of availing cheap transport for commuters. Due to rising fuel prices, private kombi operators have taken it upon themselves to increase fares weekly, much to the chagrin of passengers already battling to make ends meet.

Private kombis are going for between $6 and $7 per from the city centre to suburbs like Southlea Park, while Warren Park commuters are forking out $4, but when using Zupco kombis, $2 is the fare for the same routes.

Again, from the city centre to Highlands, a distance of not more than 5km, private kombis charge $5 compared to $2 for Zupco kombis.

More and more commuters now prefer to wait for Zupco kombis, so they can save at least $6 per day.

Lawrence Shoko, a Chitungwiza resident, said Zupco kombis were a welcome development because they take a shorter time to fill up than conventional buses, especially during off-peak hours.

Apart from being friendly to the pocket, the coming in of Zupco kombis will ensure orderliness at loading bays. Kombis will no longer compete for passengers, most of whom use the tap card.

Also, kombi drivers no longer jostle to load clients at undesignated points to fill their vehicles and have enough time to meet their  daily targets employers.

This forces them to pick up passengers at undesignated areas and avoid designated ranks. This means that  if more private transport operators join the Zupco facility, most most likely stop using undesignated pick-up points, popularly known as “mushika-shika” .

This will hopefully reduce traffic congestion in the city centre, especially along Park Street and the illegal pick-up points at the corner of Chinhoyit, Mbuya Nehanda and Jason Moyo streets.

In the long run, the Zupco kombis might bring to an end operations by mushikashika vehicle operators who have flooded the central business district.

The city council should ensure that it provides enough ranks to make the system more convenient for commuters.

While some have said the partnership is doomed to fail as Zupco does not own any vehicles, it must be noted that the issue is not about who owns what, but how the business is managed.

An example is Uber, the world’s largest taxi company. Uber owns no vehicles, but is managed well such that customers get a service when they require it.

Maintenance of any transport system is essential, rather than ownership. If Zupco manages the system well by, for example, paying kombi owners on time, the facility will be in place for years.

However, while commuters are rejoicing at the advent of Zupco kombis, some commuter omnibus operators who are used to profiteerimg are sulking at the latest development.

An omnibus conductor identified only as Gody said the coming in of Zupco kombis has heightened competition in the industry, at the same time forcing them to reduce their fares in order to survive.

In suburbs such as Highlands, some kombis have slashed fares to $3, because no one bothers to board private kombis when there is a cheaper alternative.

The private omnibus operators should either up their game or risk losing out completely. If they cannot beat Zupco, why not join them?