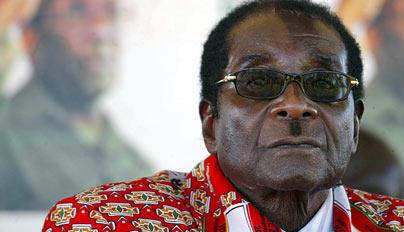 HARARE – Wearing a worn-out cap with former president Robert Mugabe’s famous signature and an oversized yellowing white shirt emblazoned with the face of a smiling President Emmerson Mnangagwa, Lovemore Mukwezva, who lives in the fallen despot’s rural home of Zvimba, is torn between the past and the present.

On one hand he misses his old home boy Mugabe, who was removed from power through a soft coup last year, but on the other, he says he is enjoying the new-found freedoms ushered under Mnangagwa’s rule.

The police and secret agents, who used to comb the villages around Mugabe’s now abandoned mansion, are gone.

Even at the nearby bottle store, villagers drink Chibuku Super — a commercial sorghum beer —while freely engaged in political banter.

People talk freely of politics here but also equally feel the pinch of skyrocketing prices, something they contend Mugabe could have dealt with swiftly had he still been in power.

When Zimbabwe’s army took power in a bloodless coup exactly one year ago, it promised to bring happiness back by ending social and economic suffering.

The military said the coup was needed to “target criminals” around Mugabe and to stamp out corruption which had plagued Zimbabwe for decades.

In fact, a military spokesperson, Major General Sibusisiwe Moyo, now Foreign Affairs minister, made an announcement on State television saying the army was targeting “criminals around” Mugabe, who were “committing crimes that are causing social and economic suffering in order to bring them to justice”.

But as Zimbabwe marked the coup’s first anniversary last week, Mnangagwa’s government is facing a public perception crisis, with the economy stuttering and corruption
as endemic as ever.

“Nothing really has changed but of course we can now walk freely but then the prices have gone up and we cannot afford basics. So, in a way, what we could not get under Mugabe we are getting it under Mnangagwa and vice versa,” he said.

Although his successor still continues the same largesse splurging scheme, the scale is not as large under the new dispensation.

“People are getting inputs but not on a large scale as was the case when Mugabe was still in power,” said Mukwezva.

Unlike in other rural settings, Mugabe’s close neighbours in Zvimba communal lands have electricity and taped water.

The 94-year-old former president also availed an irrigation facility but that extends to only those who were very close.

Mugabe’s fall was universally accepted across the country.

Youths like the 34-year-old Mukwezva have never been formally employed in their lives and live on crumbs, thus his departure was supposed to herald the dawn of a new era, but so far it hasn’t.

In this land that gave birth to Zimbabwe’s founding father, he is still a hero of sorts, an enigma whose influence still reverberates in the pastoral lands, creeks and shopping centres.

To make matters worse for his successor Mnangagwa, the economy was in a better state before the fall of Mugabe than what it is now.

“From that day when armoured cars rolled onto the streets of Harare there has been no change. Instead, things are getting out of hand.

“We cannot afford to buy things in shops because they are expensive. We need foreign currency and that is the only way we can say change has arrived. It seems the President has no control of the system,” said Wonder Chenhaka, a 60-year-old man with a family of six.

Turning back the hands of time before the coup, life for the Chenhakas was better, he said.

It was never smooth but the prices in shops were affordable and from the piece jobs he used to do, he could fend for his family.

“When Mugabe was still in power, we did not have problems in terms of prices, he had the authority to bring prices down but Mnangagwa has failed in that regard even though he had given us some freedoms.

“I think the only way out for Zimbabwe now is if the leadership could come together and form a government of national unity (GNU) then they could be stability,” Chenhaka said.

Zimbabweans have fond memories of the GNU between Mugabe and the late MDC president Morgan Tsvangirai between 2009 and 2013.

During that hiatus, prices stabilised following the introduction of a bucket of foreign currency and some companies opened, however, it is now all in the past with Mnangagwa who won the election by a wafer thin and contested margin reluctant to go the Mugabe route.

“We used to get fertilisers and other things but not anymore. Now all we get are empty promises. The president should do something with the prices. He is so quiet on the issue as if he is not seeing our suffering,” said Chenhaka.

Villagers here recalled with nostalgia how Mugabe upon returning from his many foreign jaunts, he would immediately restore sanity if there was pricing madness as obtained this year.

Businesses swiftly complied with his edicts without a murmur. And that, to an elderly woman who lives just a few metres from Mugabe’s home, was the hallmark of a good leader.

“I am 78 and did not get anything from government, they did not give us farming inputs. Only five people got the inputs,” the elderly woman from Kutama village who declined to be named told the Daily News on Sunday.

Although she still has running tap water and electricity, a rarity for most people of her age, she is bitter by the manner in which Mnangagwa turned against his own “friend”.

“We used to be beaten if we walked along First Street (in Harare). A white boy would slap you and you could not fight back. Now that we are liberated, we turn against Mugabe. Zimbabwe would never be the way it is now had it not been for Mugabe,” she said, politely refusing to give us her name.

There is reason for her bitterness.

The irrigation scheme is gone, the police who used to patrol the villages maintaining peace and order are gone, and crime is on the rise.

“I used to have wheat but not anymore, there is no irrigation and when it broke down no one came to our rescue. Mugabe is no longer coming, the person who came for about two times is Grace but she has since stopped,” said the woman who lives a stone’s throw from Mugabe’s home.

During his heyday, Mugabe would regularly make his way to Zvimba using a tarred road where one would not just idle without attracting some State Security agents.

The parameter fence around his home is falling, and out of site Mugabe’s home is slowly wasting away with caretakers doing the best they can to keep it in shape.

One popular comparison between the old and the new is, when Mugabe was still in power a two-litre bottle of cooking oil was selling roughly for $4 but now it has gone up to as much as $15.