Two new members of the National Assembly were yesterday sworn in following their victories in by-elections held last month.

The two are Zanu-PF’s Cde Hlalani Mguni, who won the Mangwe seat that fell vacant following the death of her husband Obedingwa Mguni and Mr Vincent Tsvangirai who won the Glen View South by-election, replacing his late sister, Vimbai Tsvangirai-Java.

The new MPs took their oaths before Clerk of Parliament Mr Kennedy Chokuda in terms of Section 128 (1) of the Constitution.

Cde Obedingwa Mguni, who was Zanu-PF’s deputy chief whip, died from diabetes complications, while Mrs Tsvangirai-Java succumbed to injuries sustained in a road accident in May. 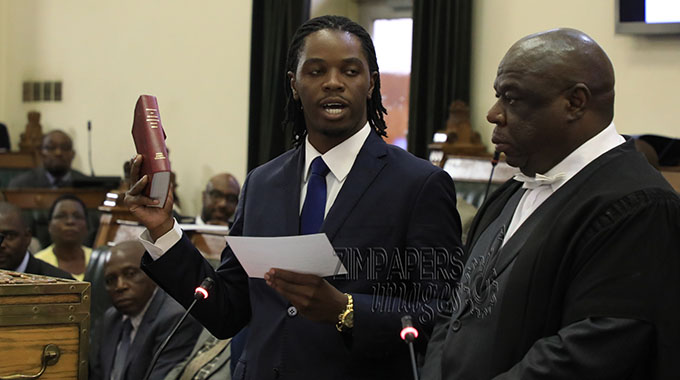 Meanwhile, Government has reviewed the Constituency Development Fund allocated to MPs for developmental projects in their constituencies.

“Following the Budget Review Statement and Supplementary Budget presented by Honourable Minister of Finance and Economic Development Professor Mthuli Ncube, I wish to inform honourable members that the CDF for 2019 has been reviewed upwards from $80 000 to $175 228,” said Adv Mudenda.

He urged parliamentarians to present their project proposals for funding.