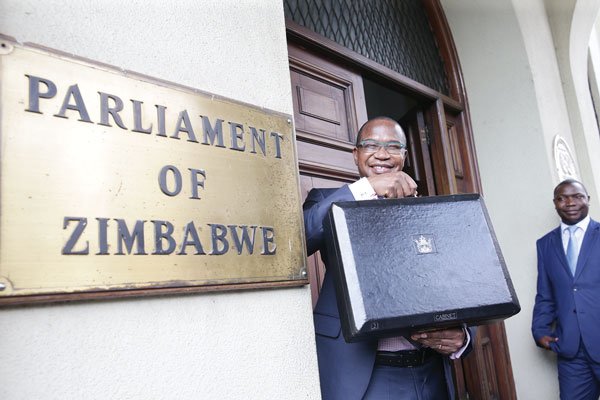 THE year 2018’s major highlight in the Legislature was the swearing in of new Members of Parliament for the Ninth Parliament, which saw mostly young and educated people from across the political divide becoming MPs.

Although this proved to be an advantage in terms of the quality of debates; this also brought in argumentative legislators in the Ninth Parliament, which is only four months old; resulting in lots of drama, squabbles and too much toxic exchanges of words.

The Ninth Parliament was officially opened by President Emmerson Mnangagwa on September 18 and it ushered in 80 Senators, 34 Zanu PF, 25 MDC Alliance, one from Thokozani Khupe’s MDC-T, 18 Senator Chiefs and two Senators representing people with disabilities. Senate had less drama during 2018.

The Ninth Parliament National Assembly is composed of 270 MPs, of which elected MPs in Zanu PF are 114 and 26 from proportional representation (PR). The MDC Alliance has 64 elected MPs and 22 PR, while the National Patriotic Front (NPF) has one MP and one is independent legislator.

This was the most raucous House, with Mnangagwa suffering his first humiliation during the official opening. MDC Alliance MPs refused to stand up in reverence for the President as his procession walked into the National Assembly. He was heckled, and as he began to read his speech, they walked out of the House in protest of the elections, which they were considered stolen from their party president Nelson Chamisa.

Mnangagwa’s appearances in Parliament, during the official opening and State of the Nation Address (Sona), were characterised by chaotic scenes and disruptions by opposition MDC Alliance MPs.

The worst of the skirmishes were during the 2019 budget statement in November. What transpired was that before Finance minister Mthuli Ncube announced the budget, Mnangagwa entered the House to listen to the statement. Zanu PF MPs stood up for him in respect, but MDC Alliance legislators remained seated.
Speaker of the National Assembly Jacob Mudenda then unleashed Parliament police officers on MDC Alliance legislators, who forcibly removed them from the House for refusing to stand up for Mnangagwa.

Female MPs were roughly dragged out such that some had their underwear exposed in Parliament, while others got injured during the scuffle, resulting in two MPs Thabitha Khumalo (PR) and Lynette Karenyi (PR) being hospitalised.

The roughing up of MDC Alliance MPs was in the full glare of Mnangagwa and his deputies Vice-Presidents Kembo Mohadi and Constantino Chiwenga, who just sat and watched the drama together with several other important people, including the United Nations Development Programme country representative Bishow Parajuli and Diplomats.

Mudenda only said: “I would like to humbly receive the President and Head of State and Commander of the Defence Forces, and I want to apologise for the delay. It is wrong that MPs cannot respect the Head of State at a time when the international community has accepted that the President is the Head of State. No other person, including MPs, can be allowed to have a different view, and Parliament administration shall take appropriate action.”

The other serious scuffle that resulted in the National Assembly failing to sit in order for MPs to debate issues affecting the nation was on November 14 when MDC Alliance chief whip Prosper Mutseyami introduced a motion on the issue of vendors.

During the melee, Zanu PF legislators sang “ED Pfee”, while MDC Alliance MPs shouted “Chamisa”. This resulted in Deputy Speaker of the National Assembly, Tsitsi Gezi, leaving the Chamber without properly adjourning the House after the fracas went on for more than 30 minutes.

The issue on the problems that vendors faced in the country in 2018 has not been debated to date.

The most unfortunate incident that happened during the four months after resumption of the Ninth Parliament in 2018 was abuse of female MPs by their male counterparts.
Parliament is supposed to uphold the Constitution which promotes gender equality, but alas, even during the 16 days of activism against GBV, female MPs suffered a lot of abuse.

The worst affected was the youngest MP Joanna Ruvimbo Mamombe (MDC Alliance, Harare West), who was very often unfairly disgraced by Zanu PF legislators Tafanana Zhou (Mberengwa North) and John Paradza (Gutu West), by labelling her a “prostitute” whenever she stood to contribute to debate.

Another female who suffered at the hands of Zhou and Paradza was Karenyi who they labelled “a fourth wife’. The harassment was seemingly aimed at dislodging the two female MPs so that they lose confidence when contributing to debate in the House.

Noticing that the extent of the verbal abuse was now too much, Karenyi ended up raising a point of order.

Karenyi said: “The moves and utterances by some of the male MPs — and I am going to shame them, Zhou and Paradza, commenting on the body features of female MPs; to me it is sexual harassment. As female MPs, we take such moves as disrespectful because we are not sexual objects, but we are legislators and we deserve respect.”

In another incident, and during the 16 days of activism against GBV, Buhera South MP Joseph Chinotimba (Zanu PF) labelled Khumalo (Thabitha) a prostitute.

He refused to apologise and this angered Khumalo, who then threatened Chinotimba with a lawsuit. She then stormed out of the House in anger.

But Chinotimba later realised his abusive mistake, and he swallowed his pride and sought forgiveness.

In the National Assembly, Chinotimba stood side-by-side with Khumalo, and he announced that it was bad to abuse females, particularly in Parliament. They hugged and confirmed that they had amicably resolved their issue.

During debate on Finance No. 3 Bill, to do with the 2019 National Budget, MPs refused to pass the Parliament vote ($101 million) until it was increased to $163 million.
Norton MP Temba Mliswa (Independent), who was very instrumental in the House in mobilising MPs to demand good perks said: “MPs are handicapped and we are talking of only one car, a Landcruiser, which is the only car good enough for MPs to do their work because the Mazdas and Toyotas we get are not good enough.”

He said MPs were looked down upon because they did not even have iPads, adding that the $75 daily sitting allowances that they got was pittance, which needed to be reviewed. Mliswa said their diet, where they eat a one course meal with banana or an apple for desert, was not proper as in other Parliaments they had more savoury desserts like trifles and ice-cream.

“MPs must have world class gyms and recreational facilities to play golf. MPs must also be given diplomatic passports,” Mliswa said.
After getting too much pressure from MPs, Ncube increased the Parliament budget vote to $145 million.

A bid by the main opposition MDC Alliance MPs to have the 2% transaction tax blocked from being implemented and cut to a 0,5% tax hit a snag in the National Assembly when Zanu PF legislators used their majority to vote for its implementation.

Parliament on Thursday last week had to sit until the wee hours of the morning (till 1:02am on Friday morning (December 21) as MPs debated clause 4 of the Finance No. 3 Bill to do with the 2% transaction tax.

However, after a very heated debate, Chinotimba suggested that the House be divided so that they vote for the fate of the 2% tax.

Zanu PF won after 80 MPs voted in favour of the 2% transaction tax, while 26 MDC Alliance MPs voted against. Other MPs had already gone home.

In the National Assembly, several MPs gave notice to introduce motions on different topics including electoral reforms, poverty, vendors, war veterans, gender equality and the liquidity crisis. Most of the motions are yet to be debated.

In Senate, the motions discussed included disability policy framework, devolution and provincial councils, and the national drug policy, among others.

Committee sittings of both portfolio and thematic committees were very vibrant, although there was a lot of drama witnessed during sittings of the Mliswa-led Mines and Energy Portfolio Committee.

The drama happened when British business tycoon and shareholder of the Hwange Colliery Company Nicholas Van Hoogstraten was denied a chance to give oral evidence on the HCCL issue by the Zanu PF Mines Committee members. Their disquiet was that the matter was now sub-judice (before the courts).

Van Hoogstraten had flown all the way from London to give oral evidence before the committee after getting an invitation to appear before them — but before he could say anything, Zanu PF MPs disrupted him, saying he would never give oral evidence on the Hwange Colliery Company Limited issue.

The interruptions were embarrassing, resulting in Van Hoogstraten remarking: “Is there no procedure here that people that are disrupting proceedings in Parliament must be removed? You should have respect for this Parliament.”

Clerk of Parliament Kennedy Chokuda had to come in to douse the noise, and the ruling was that the matter was before the courts and Van Hoogstraten never had a chance to give oral evidence.