The President delivers his address to the meeting – Pictures: Tawanda Mudimu

Political Editor
President Mnangagwa yesterday praised Zimbabweans for their resilience in defending the country’s sovereignty during a difficult yet productive year in which successes were registered across all sectors, firmly laying the foundation for the attainment of Vision 2030 of becoming an upper middle class economy.

In his address at the 114th Central Committee meeting at the ruling party’s headquarters in Harare, the President and Zanu PF First Secretary said the Second Republic was inspired by milestones in infrastructural development, industrialisation and increased agricultural production.

“As a party and Government, we are inspired and encouraged by the milestones we continue to register in our quest to modernise, industrialise and grow our economy. Targets set out by the party under the 2018 People’s Election Manifesto are being achieved.

“Indisputable success continues to be scored in all sectors of our economy such as agriculture, mining and tourism, manufacturing, infrastructure development, education, health and cultural heritage.

“In the Second Republic and informed by the TSP (Transitional Stabilisation Programme) and its successor policy, the National Development Strategy 1 (NDS1) (2021-2025), the party is a party of production and productivity”.

Through devolution, where Government has committed $19.5 billion in this year’s budget, the President said the ruling party is pursuing policies that will ensure no one is left behind.

“We are a party that gives credence to hard work, a party of action and results. We are delivering on the promises we made to our people and ensuring equal development which leaves no one behind.

“Under Zanu PF, those with talent are realising their full potential, while communities are deciding their destiny. Every party of our country will prosper leveraging on the various unique resource endowments.

“The party and its leadership are entrenching democracy, participatory governance and serving the people and country wholeheartedly. We shall remain resolute on this course until “Increased investment in mining, tourism and manufacturing sectors are being recorded as we journey towards Vision 2030. This will go a long way towards creating employment opportunities and improving the quality of life of our people”.

President Mnangagwa saluted the work undertaken by the ruling party in supporting and implementing Government programmes.

“The year 2020 which we themed, ‘A year of production towards Vision 2030’ has been unique and yet productive, as we registered important milestones across all sectors of our economy.

“I would like therefore to commend the Party and the Central Committee for living up to the dictates of our Party Constitution and also fulfilling our Conference Resolutions. The party’s support in the implementation of various policies, programmes and projects by central government and local authorities, has been invaluable. I equally applaud the Leagues of the Party and the citizenry of our country as a whole for remaining resolute in defending national sovereignty. 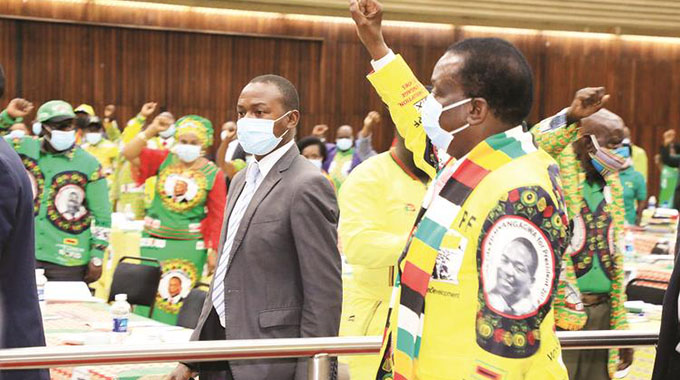 “In unity, we triumphed against the clandestine machinations and onslaught from our detractors which manifested through social media platforms and the foiled demonstrations. The prevailing spirit of unity, peace, harmony and hard-honest work must continue to strengthen our resolve as a revolutionary party and a democratic and peace loving nation”.

The President said the coming new year calls upon Zimbabweans to remain vigilant to the threat posed by the country’s detractors who have poured millions of dollars towards regime change.

“As we do so, we must, as a revolutionary Party, always be mindful that we are a People’s Party, the Party of Choice and a party for all Zimbabweans. For indeed the decisions we make have far reaching implications for our communities and nation in general,” he said.

With the ruling party making tremendous strides towards development of the country the President said party members must promote the party policies that have changed lives in the country.

“As required by our Party Constitution, all members have the duty to strengthen, promote and popularise the party policies, programmes and projects among people. We will not wait for the 2023 campaign season to outline our successes. As an accountable, transparent and responsive People’s Party, let us continuously keep the people informed and involved in all programmes we are undertaking”.

Meanwhile, the President said the recently held district coordinating committee (DCC) elections should serve to unify the party with both winning and losing candidates supposed to work for the party ahead of the 2023 elections.

“Internal elections must never classify, stratify and divide our members or deem some as more Zanu PF than others.

“Our colossal Party exists over and above every member. The Party is supreme and all of us must subordinate ourselves to the party, its constitution, precepts and traditions. It is the party that has ultimately won, it is democracy that has prevailed”. 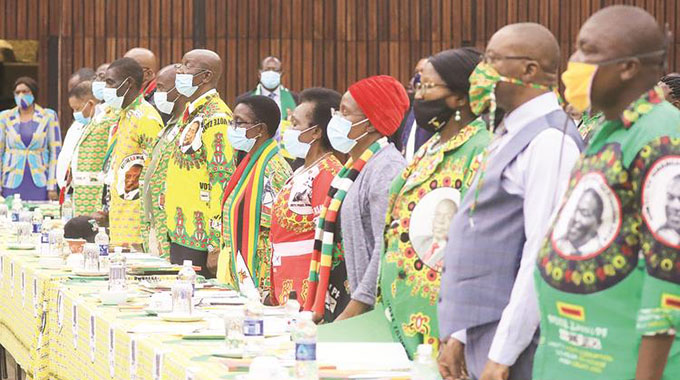 Central Committee members observe a moment of silence in remembrance of cadres who died this year.

After the completion of the DCC elections time has come for the infusion of the new vibrant leaders in the party structures, who must align themselves with the culture, vision and work ethic of the Second Republic, the President said.

“Going forward, all members must deploy their skills, competencies and energies towards growing the Party to record another resounding victory in 2023 harmonised general elections. Until then, let us all work to ensure production and productivity in all economic sectors within our communities”.

The Second Republic has been working around the clock to climate-proof the country’s agricultural sector through mechanisation and also farming concepts such as Pfumvudza that will ensure every household will have enough food next year and going into the future.

The Central Committee meeting was supposed to have been held ahead of the National People’s Conference that was postponed because of the Covid-19 pandemic.

In compliance with World Health Organisation (WHO) regulations to curb the spread of Covid-19, the meeting only had five representatives from each province attending.

The Central Committee was held in accordance with Article 7 of the Zanu PF constitution, which mandates the party to assess progress made this year as well as provide direction for the party as the country enters into year 2021.